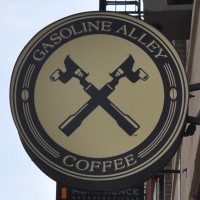 New York City’s Gasoline Alley is a curious place. It could easily BE an alley, providing a cut across between Lafayette and Mulberry streets, on which some enterprising soul has put doors at either end and a roof on top to turn it into a coffee shop. Disappointingly, it’s not, but the feeling that you are sitting in an alley is hard to shake.

What made Gasoline Alley for me was the coffee; it serves Intelligentsia, a brand which I’m familiar with from my many visits to Chicago and one which I really like. Of course, great beans don’t guarantee great coffee, but in Gasoline Alley’s case, the baristas use their La Marzocco espresso machine to get the very best out of Intelligentsia’s Black Cat seasonal espresso blend.

Gasoline Alley is part of the growing trend of coffee shops with strong links to cycling. It proudly announces this with a racing bike hanging above the counter and, as if to confirm the link, the Arc Racing Team stopped by for coffee while I was there, adding a certain frisson of excitement!

The second Gasoline Alley, which was further down on Lafayette on the corner with Grand, has sadly now closed, although there is another location in the West Village which I hope to visit one day.

On re-reading my notes for Gasoline Alley, I had to remind myself that I actually liked it, the notes themselves reading like a long litany of complaints… So, bear with me.

The issue I have with Gasoline Alley is that it seems to fall between two stools: it’s got too much seating/space to be strictly a take-away joint, but, unlike the (now closed) second location, it doesn’t have the atmosphere (for me) to be somewhere I’d want linger over my coffee.

That’s a shame, because there’s a lot I like about it. Facing onto both Lafayette and Mulberry Streets, It’s reminiscent of a long, wide corridor with the counter almost the length of one side. There are bare-brick pillars at either end, framing whitewashed walls, all capped by a lovely, high wood-beam ceiling. Pillar-to-pillar, floor-to-ceiling windows at both ends flood the place with light, which is aided by some interesting, bare light bulbs and mirrors on the walls. This also gives it a sense of space, helped by the limited seating. Inside there are just two small window bars, one either side of the counter, each with two neat bar stools/chairs. If you’d prefer to sit outside, there are three benches on either sidewalk.

Unfortunately, this same sense of space also lets Gasoline Alley down. In keeping with the alley theme, there are doors at either end, ensuring that there’s a steady stream of customers in both directions. Since the only interior seats are by the doors, this doesn’t really help, and having doors at either end seems to suck the atmosphere out of the place. Perhaps to compensate, the music is really loud; too loud for my tastes, even though I actually liked it. The periodic rattle of subway trains passing underneath completes the soundscape.

Sitting outside isn’t much better. Compared to my previous stop of Gimme! Coffee, the bland, brick building on Mulberry and the roaring traffic on Lafayette do not compare favourably to Mott Street’s tenements with their interesting fire escapes.

So, that’s what I didn’t like. What made Gasoline Alley so special was the Intelligentsia Coffee from Chicago, a long-time favourite of mine. The Black Cat espresso I had was pretty good: nice, short and strong. Gasoline Alley also has a really great logo: two crossed espresso-basket holders. I know, I know, I shouldn’t be swayed by such things. But I am…

Gasoline Alley doesn’t try to do too much, restricting itself to the obligatory drip filter and the usual range of espresso-based drinks which are chalked up on the walls either side of the counter to form a minimalist menu. There’s a small, but tasty-looking range of cakes and a handful of savoury options. I forwent the pleasure of a cake and had a spinach pastry which was excellent and very filling.

Before I left, I had a chat with the barista, who, somewhat ironically, was from London, although she had been in NYC for about five years. She explained the cycling connection: one of the owners also races in the Arc Team who had popped in that afternoon. Although the only cycling-related item in Gasoline Alley was the bike hung above the counter, she said it was a firm favourite in NYC cycling circles and various teams often popped in for a Sunday-afternoon espresso.