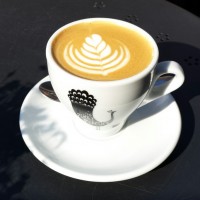 August 2015: I popped back to discovered that The Perky Peacock has switched roaster from Origin to Essex’s Modern Standard. The good news is that the coffee is as good as ever! The branding has also changed, with the old round logo being replaced by a far perkier peacock! I’ve updated the gallery with some pictures with the new branding at the end.

September 2016: The Perky Peacock is now back to being a chain of one, with Gillygate being handed on to Rae & Webb, which I hear is doing great stuff.

If you don’t know it’s there, the Perky Peacock’s easily missed, tucked away almost underneath the Lendal Bridge. Even if you do about it, Google Maps isn’t much help, putting it on the other side of the river, while trying to get its address is almost impossible.

Walking from the station towards the city/cathedral, ensure you’re on the left-hand side of the road (the wall side). Just before the Lendal Bridge, look dow/to your left, and there, by the riverside, is the North Street Postern Tower, home of the Perky Peacock, which opened in late 2009.

There’s a row of four two-person tables at street level, where you’re sheltered from the traffic. However, you have to go up a steep flight of steps to get to the tower and order. At the top there’s a landing/enclosed courtyard with a pair of tables, an even better exterior option, since you’re sheltered from the passing pedestrian traffic as well. Having climbed up the stairs, you may as well sit here, unless, of course, someone got there first!

Stepping through doorway in the massive stone walls, there’s a surprisingly large interior. The Perky Peacock occupies the top of the (almost) circular tower, about a third of which is given over to the counter. This runs across the tower, effectively cutting it in two, with a decent work area behind it. The tower’s not quite circular: a small, square projection holds the door in the left-hand corner.

As you enter, there’s a red, Formica-topped, three-person table ahead of you, then, to your right, along the curve of the walls, is a large (five-person) wooden table, a glorious, deep leather sofa with coffee table and two stools and finally, a smaller three-person table next to a window seat that could take two more.

The interior’s lovely, with a (slightly uneven) stone-flagged floor, bare, dressed stone/brick walls and a conical ceiling made of wooden beams and cross-supports. Windows pierce the walls all the way around, making it a very bright space.

The counter itself is interesting, being two chests of drawers, with one of the drawers open to hold the crisps and another pressed into service to hold the sugar and sweeteners. Next comes a gap, then a chiller cabinet and a set of shelves holding coffee beans for sale. The cakes are on top of the chests of drawers, directly in front of you as you come in, while the espresso machine is behind the counter, business end facing the customers.

As with Gillygate, the main coffee, which rotates regularly, is from Origin (now Modern Standard), but there’s also a regularly-rotating guest from James’ Gourmet (a Brazilian Fazenda while I was there). At the suggestion of the chalk-board, I tried this with milk (it recommended a cappuccino, so I had a flat white) and found that it was lovely, a deep, rich flavour, with sweet after-notes. It can also be had through the Aeropress.

There’s a limited breakfast menu: toast, bagels, porridge, bacon buttie and poached eggs on toast (the last two only until 11 o’clock). For lunch, there are sandwiches and soup, supplemented by a limited but tasty-looking cake range. Since I was there for breakfast, I had (brown) toast, which was nice and crunchy, but not overdone. It came with jam in a purple espresso cup.

You can also see what fellow food- and coffee-blog, Diane, made of The Perky Peacock in her blog, A Tale of Two Sittings.