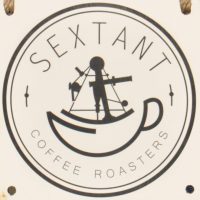 Sextant Coffee Roasters is a relatively new name in the San Francisco speciality coffee scene, but fits perfectly into the model established by the likes of Four Barrel Coffee and Sightglass Coffee. Like them, it’s a coffee shop/roaster, roasting on the premises on a vintage cast-iron roaster and occupying an old, warehouse-like building with high ceilings, skylights, exposed rafters and bare brick walls. It’s also roughly halfway between the two, sitting on Folsom Street between the Mission (Four Barrel) and SOMA (Sightglass), just a block from the Wrecking Ball roastery.

When it comes to coffee, Sextant specialises in Ethiopian coffees, the owner, Kinani Ahmed, hailing from Ethiopian. However, it also occasionally roasts some Central and South American coffees, aiming to roast light and extract the maximum sweetness from the coffee. The house-blend, Maiden Voyage, is always on espresso, while there are two single-origins on pour-over, using the Kalita Wave filter, and another on bulk-brew, all changing on a weekly-basis. If you fancy tea, then there’s a selection of loose-leaf teas brewed using the Silverton drippers (which I’ve only seen at La Colombe, where they were being used for coffee). If you’re hungry, there’s the usual range of pastries and cookies.

The first thing to say about Sextant Coffee Roasters is that it occupies an absolutely gorgeous space. It might have had something to do with the late evening sun pouring in through the west-facing front windows, but as much as I loved Four Barrel in the Mission and Sightglass on 7th Street, I think this tops them both.

On Folsom Street, near the corner with 10th Street, Sextant is on the southern edge of SOMA and the western edge of the Design District, an area of old industrial buildings. This industrial heritage is still present in the multiple car dealerships and body shops surrounding Sextant. The space itself is long and thin, perhaps as long as Four Barrel, but maybe a shade under half as wide. The layout is simple and uncluttered, with an open seating area at the front, more seating in a corridor-like section that runs from front to back (where you’ll find the roaster) and, finally, four round tables in a secluded yard at the back.

Sextant has a glass door on the right, with two floor-to-ceiling windows on the left. Stepping inside, the corridor stretches ahead of you, counter set back on the left, leaving space for an open seating area with three small, round, well-spaced tables between it and the window. The Victoria Arduino Black Eagle espresso machine faces the windows, but you order at the till around the corner, which is where you’ll find the cake. You can also sit here at the counter on one of a handful of bar-chairs, watching the coffee being made. The tea and pour-over operation is on a second worktop behind the espresso machine.

The corridor has a line of seven round, two-person tables along the exposed brick of the right-hand wall. About half-way down, there’s a six-person table on the left, followed by the roastery, separated from the seating by wooden railings. If you want to watch the roaster, a refurbished Probat UG22, in action, there’s a narrow four-person bar which provides the perfect vantage-point. There’s more seating down here, this time against the right-hand wall opposite the roaster, where you’ll find three four-person high tables, beyond which are various sacks of green beans. Finally, the corridor ends with the door in the back, opening onto the yard.

There’s lots of natural light, including two narrow windows at the back, and regular skylights along the length of the corridor. The lighting is subdued towards the back, although I suspect that it’s brighter in the morning.  To help things out, there are multiple lights hanging from the ceiling.

When it comes to coffee, Sextant tries to make things as accessible as possible. Rather than relying on regions/origins, which can be confusing to the non-coffee-obsessed, Sextant names its main coffees, such as its Maiden Voyage house espresso, a blend of Ethiopian coffees (Sidamo and Yirgacheffe).

I started with the Maiden Voyage, a very fine espresso. This has a pleasant kick in the first sip, which gave me a much-appreciated jolt. A fruity blend, it was, after that first hit, quite smooth. I followed this with a single-origin Sidama Hirmate pour-over (the alternative was a Harar Ogsa Day’s Horse). A rich, fruity coffee, with lots of body, it too was very smooth. Served in a mug, it was just as good cold as it was hot, and I really enjoyed it.

I was very fortunate during my visit, as I not only manged to meet the owner, Kinani Ahmed, but also the head roaster, Mel, and barista, Anthony, all of whom chatted away to me for ages over my coffee.

December 2017: Sextant Coffee Roasters was a runner-up for the 2017 Coffee Spot with the Best Lighting Award.