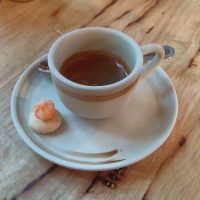 I spent the first five days of my time in Thailand trapped in hotels with bad coffee and no chance to explore the coffee scene, before heading off to Chiang Mai for a week. However, I’d allowed myself three days on my return to Bangkok to explore the speciality coffee scene before flying back to the UK. After the joys of Chiang Mai, with its abundance of excellent coffee shops, I discovered that Bangkok also has an excellent speciality coffee scene, albeit one that is a little more spread out and takes a little more finding.

I’d already heard about Lan Din Coffee when the owner, Nico, got in touch on social media with some recommendations. Conveniently located around the corner from my new hotel in the Sathorn district (I wonder how that happened?) I made a beeline for Lan Din as soon as I got off the sleeper from Chiang Mai on Saturday morning. A delightful spot, it serves a primarily espresso-based menu using a blend of coffee from (ironically) Chiang Mai, although there is a secret pour-over option if you ask nicely, as well as a range of cakes and pastries, freshly baked behind the counter every day.

You’ll find Lan Din Coffee south of Lumphini Park in the heart of Bangkok. Down a narrow lane, it’s off the courtyard of the Pantip Suites Hotel, which rents out serviced apartments. While Lan Din acts as the on-site coffee shop, it’s a completely independent and standalone operation, with its own entrance from the street (use the left-hand drive into Pantip Suites, although you can get to it from across the courtyard if you enter on the left).

Lan Din occupies a roughly square space on the corner next to the fitness centre. There’s floor-to-ceiling windows all the way around on both the front and right-hand side, with a glass door on left at the front. Despite this, it’s relatively subdued, partly because it’s under a wide porch and looks out into the tree-filled courtyard. On the plus side, there’s plenty of shade, vital once the fierce Bangkok sun gets going.

It’s also air-conditioned, the result being a welcoming, cool interior, although you can sit outside if you want. There are two low, four-person tables (I’m not sure I would fit, they are that low!) and two more conventional, round, two-person tables. The precise configuration depends on the weather: I visited at the start of the rainy season, so found them clustering under the porch for shelter!

Inside, the layout’s simple. A window-bar runs from the right of the door, with two seats along the front and six down the right-had side, where you’ll get the best views of the tree-filled courtyard. The small counter is at the back on the left and there are two square, four-person tables, again with low stools, in the space between the counter and window-bar, one in front of the counter and one to the right. Finally, there are two low stools to the right of the counter where you can watch the espresso machine in action if you like.

Nico, who is from Brussels, opened Lan Din at the end of 2017. He is a passionate supporter of Thai coffee and direct trade, working with a cooperative in Chiang Mai which produces and roasts the coffee that goes into the house-blend. There’s also pour-overs (although you have to know to ask) for which Nico has a secret stash of coffee from around the world, while there are also cocktails if that takes your fancy.

All the cakes and pastries are baked in a small oven behind the counter. The Belgium waffles, Nico’s speciality, are also made there, using a couple of ingredients imported directly from Brussels.

I started out with a cortado and a freshly-baked pain au chocolate, along with a glass of freshly squeezed orange juice for breakfast. This was one advantage of the sleeper from Chiang Mai being 40 minutes late: Lan Din was open by the time I got there, walking in with my pack at 08:10 while the croissants were still baking!

The blend that Nico uses is roasted darker than I would normally like, but is very well done. It cut through the milk in the cortado nicely and when I tried it on its own, I found it was surprisingly smooth, without any of the bitterness that I was fearing might have been masked by the milk. I returned the following day to try the waffles, which were delightful, made with a rich, yeast-based dough, but not too sweet. I paired these with a rich, creamy latte, which is, I feel, the best ratio of milk to coffee for this blend, the result being a strong, but not overwhelming coffee and the perfect start to my day.