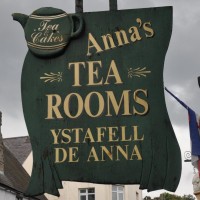 No trip to Conwy is complete without a visit to Anna’s Tea Rooms & Coffee House. Okay, so Conwy’s got one of the best examples of King Edward I’s castles, which is a masterpiece of medieval military architecture, the most complete set of medieval walls in Britain and Plas Mawr, a fine, Elizabethan town house. But, but…, it’s also got Anna’s!

Situated above an outdoor shop on Conwy’s Castle Street, a stone’s throw from the castle itself, Anna’s is a complete gem. For a start, it serves coffee by the cafetiere, with 17 different beans to choose from. Tea drinkers are even better served, with 12 black teas, three fruit teas and nine loose-leaf teas. Then there’s the homemade cakes. And the homemade lunches. And the afternoon teas. And the ice-creams, and desserts, and, and, and…

August 2020: Anna’s Tea Rooms has had a major facelift and is now Upstairs at Anna’s. There have been quite a few changes since my first visit in October 2021, including a move to Heartland Coffee Roasters, evening opening hours and its own entrance direct from the street.

Maybe it’s a sign that I’m getting on in years. I’m a real history buff and 10 years ago, I would have said that nothing makes me happier than crawling all over one of Edward’s Welsh castles, or any historic ruin for that matter. But on a recent trip to Conwy, with about an hour to kill, I forsook the delights of the castle, the allure of the town walls and the warm glow of Plas Mawr, in exchange for a cafetiere of Guatemalan coffee and a slice of apple pie, smothered with custard, at Anna’s Tea Rooms.

In fairness, ever since I discovered Anna’s many years ago, no trip to Conwy has been complete without a visit to Anna’s. Indeed, many a day out in North Wales has been subtly twisted, extended or just plain hijacked to accommodate an excursion to Conwy. Oh look, since we’re passing, let’s pop into Conwy. Oh look, Anna’s is open. Shall we go in? It would be rude not to…

At first glance, Anna’s can come across as one of those twee Victorian tea-rooms that I don’t really like. You know the sort, the ones that cater to the tourist trade, but behind the veneer, the food is second-rate and the service surly. However, appearances can be deceptive.

Anna’s very deliberately sets out to recreate the by-gone age of the Victorian Tea Rooms and the London Coffee House. The décor, the layout, even the uniforms that the waitresses wear, all create that atmosphere.  However, there is nothing false or twee about Anna’s. Homemade cakes and lunches abound, while the vast range of choice for the coffee and tea drinkers speaks of a passion for doing things properly rather than conveniently.  And in all the times I have been there, the service has never been anything but exemplary.

As I have mentioned, if I’m not drinking espresso, a cafetiere is my coffee of choice and it’s a shame that more places don’t offer it. That Anna’s offers 17 choices of coffee to have in my cafetiere is a sure sign of dedication. Even better, Anna’s sells all the coffee (and tea) that is served (if you’re interested, the tea and coffee is all from Taylor’s of Harrogate).

Anna’s is a great place, any time of the day (except the evening, when it’s closed; well, you can’t have everything). I’ve never been there early enough to try Anna’s breakfast offerings, although since they’re served all day, I don’t really have an excuse! Breakfast consists of various things on toast, which dovetail nicely with Anna’s range of sandwiches  and toasties. There are also baked potatoes and homemade soup, along with a range of more substantial daily specials, all the way up to a traditional Sunday roast. Vegetarians are also well catered for.

Of course, I can’t go without mentioning the excellent range of homemade cakes and pies. There’s something for everyone’s tastes (or, in my case, far too many things; please don’t make me choose, I’ll have everything!). If you feel you can manage more, there’s Anna’s Cream Tea (scones and tea) or Afternoon Tea (scones and sandwiches). Finally, if your tooth’s not that sweet, you’ve always got the option of toast, toasted tea cakes, crumpets or Welsh cakes.

Go on, you know you want to…