Welcome to the next Coffee Spot Awards Shortlist for 2013, the “Best Cake” Award, which was won in 2012 by Bea’s of Bloomsbury. Despite what it says on the tag line, the Coffee Spot’s not all about the coffee. After all, what would a cup of coffee be without a decent slice of cake to go with it? So, cake plays a major part in the Coffee Spot and this Award celebrates the Coffee Spots which excel in the cake department.

This is another of my favourite Awards and while I didn’t visit as many dedicate cake spots this year, I was treated to some absolutely fantastic cake experiences along the way.

Freemans, in Edinburgh‘s leafy Marchmont, could easily have been nominated in any number of categories. However, it gets the nod here for the outstanding flapjack (baked on the premises) that I had which was one of the all-time best flapjacks I’ve ever tasted. 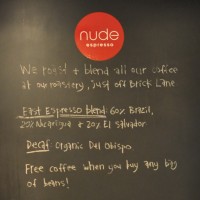 Despite the picture which focuses on the coffee, Nude Espresso on Soho Square also majors in the cake department. Everything is baked on the premises and, better still, it’s done right there in front of you on the counter. So you can literally watch them bake your cake and then eat it. What could possibly be better than that? 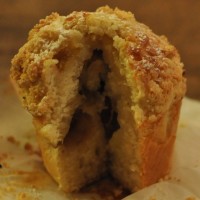 Foxcroft & Ginger is another that could have been in multiple categories, including, had I thought to create the award, “Best Basement“. However, the outstanding creation to come out of Foxcroft & Ginger is this: (probably) the world’s best muffin. Served warm, with chunks of real fruit and a liquid custard centre, if there is a better muffin then I’ve not tried it (the rhubarb and custard muffin is pictured).

The Flour Bakery + Café, with four branches in and around Boston, nails its colours firmly to the mast with the name and backs it up with some seriously tasty goodies. It also serves some surprisingly good espresso!

What can I say? Hart’s Bakery, in one of the arches under the Approach Road to Bristol Temple Meads Station, is a local legend, providing cakes, pastries and sour-dough bread to some of Bristol‘s best Coffee Spots. Not only that, but it’s a Coffee Spot in its own right, serving excellent coffee, cakes and lunches. You can even sit and watch Laura and her team of bakers at work. Hart’s has, by the way, the best cinnamon bun ever.

Angelina is a legend in Paris, creators of the famous Mont Blanc, itself reason enough to visit. There’s also a great range of other cake and sweet treats, along with hot chocolate, breakfast, lunch and pretty decent coffee. All of this is served up in sumptuous surroundings by uniformed waiters and waitresses, adding a touch of Parisian style to the proceedings on the rue de Rivoli.

Nest, in Brighton‘s North Laines, put the “lounge” into coffee lounge and also served me one of the best slices of Bakewell Tart I’ve had in many years. This is no mean feat since I am a bit of a Bakewell demon myself and know a good one when I see one!

Rounding things off is Balham’s M1lk, a great Coffee Spot, Brunch Spot and, since it’s in this shortlist, Cake Spot. I was served the most amazing hazelnut cake, perhaps the best slice of cake I’ve had this year. It had a perfect structure, crumbly enough to be light, but moist enough to hold itself together.

Special mention should also be made of Little Italy’s Caffé Roma in New York City, home of the famous St Joseph Cake, Cardiff’s lovely Waterloo Tea, which as well as excelling at tea and coffee also has some fabulous-looking cake, and Talkhouse Coffee in Portobello which has St John’s Doughnuts!

And the winner is Hart’s Bakery
Runners-up: Foxcroft & Ginger, M1lk