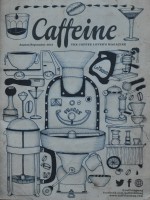 Neighbourhood Watch is the name of the feature I wrote for Caffeine Magazine. For five wonderful years from Issue 4, when I made my debut writing about Edinburgh, to Issue 31, when I visited Portsmouth, I was lucky enough to explore the coffee scene in towns & cities around the UK (plus one overseas excursion to Hong Kong in Issue 24). During that time, the majority of my articles were graced and enhanced by the wonderful photography of Amelia Hallsworth, although it always surprises people when I tell them that Amelia and I have never met, despite our prolific partnership. The way we worked is that I would visit the town or city in question, do the research, visit the coffee shops, then decide who would be in the article. Only then did I send a list of coffee shops for Amelia to photograph.

In all, I wrote 26 Neighbourhood Watch features (I got Issue 21 and Issue 28 off for good behaviour!) and I had a wonderful time, the job of visiting the various towns and cities fitting in perfectly with my self-imposed task of travelling around the UK finding all the best coffee shops for the Coffee Spot. However, all good things must come to an end, and, after my final Neighbourhood Watch feature was published in Issue 31, the editorial team decided that the feature had run its course.

Naturally, I was disappointed, but at the same time, relieved. I’ve never told the Caffeine Magazine team this, but for the last year, I’d been considering calling a halt of my own accord, so in many ways, the timing was perfect. My issue was simply one of time, or a lack of time, to be more precise. My new job, which I started in the summer of 2016, is increasingly onerous in the travel demands it places on me.

This year alone, I’ve been to America twice, Thailand and Tokyo. While I love the travel and opportunities it gives me to explore coffee shops around the world, inevitably, my ability to travel the length and breadth of the UK has been severely curtailed. Throughout 2017, I’d been struggling to fit in my Neighbourhood Watch trips and their associated deadlines around my other travel and work commitments. In the end, something had to give, so when Caffeine Magazine decided it was time to retire the Neighbourhood Watch, it felt right to me.

So it’s farewell to the Neighbourhood Watch, something which I’ve been incredibly proud to have been a part of for so long. I want to express my thanks to Caffeine Magazine for giving me a platform for five years and to Amelia for her wonderful photography. In closing, here’s a list of all the Neighbourhood Watch features…