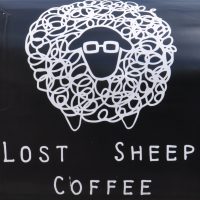 With the demise of Water Lane Coffee, Lost Sheep Coffee takes on the mantle as the stalwart of Canterbury’s speciality coffee scene, although it’s only been in its present location, down by the bus station, and in its present guise, a neat black pod, for the last two years. Before that, it was a cart on Canterbury High Street.

There’s not a lot to Lost Sheep, just the pod, which dispenses the drinks, and a black box on wheels which acts as a table, seating provided by three wooden stools. The coffee is the real draw though, Lost Sheep offering a concise and comprehensive espresso-based menu with a choice of a house-blend and a guest.

Change is afoot though at Lost Sheep, which recently opened its new roastery. Expect the house-blend to be roasted in-house any day soon, with a different roaster guesting on each month on the second grinder.

December 2019: I’ve updated my piece on Lost Sheep Coffee. This is the original write-up, published in September 2017. For an up-to-date description, please see the updated post, while you can see what’s changed in my Coffee Spot Update.

Historic Canterbury, one of the UK’s most beautiful (and compact) cities, is full of gorgeous streets and amazing sights. Sadly, the modern bus station, just southwest of the historic core, is not one of them. Indeed, unless you’re catching a bus, your only reason for coming here is to visit the wonderful Lost Sheep Coffee.

Lost Sheep must be the only coffee shop in the world with its own statue across the road. That the statue was there before the coffee shop only goes to pay testament to the foresight of the city planners. We’ll gloss over the fact that the whole thing was entirely serendipitous, the staff being as surprised as anyone when they arrived for the first day of trading to find the statue staring down from its vantage point atop a sculpted tree-trunk.

Lost Sheep set up a roastery in Whitstable earlier this year which will shortly begin supplying the Canterbury Pod and Lost Sheep’s pop-up in Ashford Designer Outlet, plus whatever other little lambs may wander along (hint: watch this space). In the meantime, the house-espresso is the four-bean Caveman Blend from London’s Ground Coffee Society.

A guest espresso graces the second grinder, which, according to Mike, my barista, will continue once Lost Sheep has moved over to roasting in-house. Mike, who is responsible for sourcing the guest roasters, proudly told me that there had been 25 of them since Lost Sheep opened two years ago, although ironically, the guest when I was there came from Ground Coffee Society!

Ground also provide a Brazilian decaf (pre-ground, since there are only two grinders) while there’s tea and Kokoa Collection hot chocolate if you fancy a change. If you are hungry, you can always treat yourself to a packet of crisps, but that’s about it.

It’s usually at this point that I urge you to bring your own cup, but while Lost Sheep does a very nice line in biodegradable takeaway cups, there are also glasses and proper cups for those, like me, who are hanging around to drink their coffee. I had a lovely, smooth flat white made with the guest, a single-origin Yirgacheffe, which went very nicely in milk (which, as an aside, held the latte art to the bottom of the glass, always a good sign).

Although it’s little more than a coffee stand, there’s a great sense of community about Lost Sheep, with lots of the customers being regulars and hanging around the black box to drink their coffee. It’s also the sort of place where the other baristas come on their days off to drink coffee, Mike being joined by colleagues Tom and Phil, while boss, Stu, was off setting up the roastery.