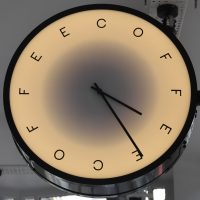 The City of London has always had good coffee as long as you know where to look for it. Initially, this was from a handful of pioneers, such as Alchemy Café and Taylor Street Baristas, but these days there seems to be great coffee springing up everywhere! One of the latest additions is Rosslyn Coffee on Queen Victoria Street, which opened in February this year. Other than its excellent coffee, Rosslyn’s claim to fame is that it’s in a building owned by Sir Alan Sugar.

Although a new name to speciality coffee, the team behind it, an Aussie-Irish duo, have years of experience behind them, having originally met working for Caravan (more Aussie connections). Although Aussie owned/inspired cafes are often known for their brunches as much as their coffee (eg Beany Green, Caravan), here at Rosslyn, the focus is on the coffee, combined with Aussie hospitality. There’s a house-blend, guest and decaf on espresso, a single-origin guest on pour-over (via the Marco Beverage Systems SP9) and a  batch brew using a second single-origin. Although you are welcome to stay, Rosslyn is not really a place for lingering, with limited seating/standing at a series of window-bars that line the space.

July 2021: I’ve updated my piece on Rosslyn Coffee. This is the original write-up, published in July 2018. For an up-to-date description, please see the updated post, while you can see what’s changed in my Coffee Spot Update.

You’ll find Rosslyn Coffee on the busy Queen Victoria Street which runs west from the Bank of England. It’s on a prominent corner on the north side of the street, across from the Mansion House and next to an old church, St Mary Aldermary, itself home to Host Café, while another café-in-a-church, The Wren, is just down the street. During my visit, Rosslyn had disguised itself in a cloak of scaffolding, which, although rather prominent in the pictures, is actually much less noticeable in real life.

Rosslyn itself is long, thin and wedge-shaped, the long side running along Queen Victoria Street, the narrow end on the right (facing in the direction of the Bank of England). The front, plus the narrow end of the wedge, are almost all glass, which, combined with the south-facing aspect, make Rosslyn an incredibly bright, sunny space, which is coupled with a bright, white, minimalist interior.

If you’re staying, there’s not much in the way of seating, just wooden, standalone bars. To the right of the first door is a two-person bar with bar stools, with a further four-person bar in the windows at the narrow end of the wedge. Meanwhile, to the left of the second door is another window-bar, standing room only this time, with a fourth bar running all the way along left-hand wall at the thick end of the wedge.

The counter is actually L-shaped since it runs parallel to the front windows, while the wedge shape means that the back wall gets further and further away as you go to the left. At the right-hand end, there’s the till and cakes, with the menu on the wall behind, retail shelves to the right of that. Next, opposite the doors, is the Synesso Hydra espresso machine, with its three grinders, while at the far, left-hand end, are two Marco Beverage Systems SP9s. The batch brewer, meanwhile, along with the EK43 grinder for the filter coffee, is on a small extension to the counter behind the SP9s.

Rosslyn has its own house-blend (70% Brazilian, 30% Colombian), roasted by Modern Standard. This is for milk-based drinks, while espressos, long blacks and Americanos use the guest espresso. This changes every three months and is currently a Peruvian single-origin from Colonna Coffee, while the decaf is a CO2-processed Nicaraguan. There’s a guest roaster on pour-over, which changes every month, and another single-origin (again roasted by Modern Standard) on batch brew, currently a Colombian.

I tried the guest pour-over, the La Huella, a washed coffee from Nicaragua, roasted by Origin. Made using the Kalita Wave on the SP9, this was served in a carafe with a gorgeous pottery cup on the side. A lovely, clean coffee, it was very drinkable, maturing slightly as it cooled. I also had a taste of the cold brew (an Ethiopian) which was one of the best I’ve had in a long time, although still not enough to convert me away from my love of hot coffee!