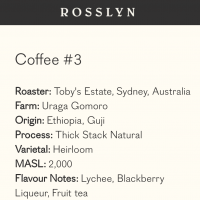 A few weeks ago, I wrote about the Frozen Solid Coffee Project from Tilt, Birmingham’s speciality coffee, craft beer and pinball joint. The Frozen Solid Coffee Project involves vacuum-sealing, then freezing, individual doses of coffee, enabling Tilt to offer an extremely wide range of single-origin pour-overs from farms/roasters around the world. When a particular coffee is ordered, the individual dose is ground and brewed (as a Kalita Wave pour-over) from frozen.

When I visited Tilt at the start of July, the owner, Kirk, told me that Rosslyn Coffee in London had a similar project, its Off Menu Coffees, launched at the same time as the Frozen Solid Coffee Project. Passing through London the following week, I naturally called in at Rosslyn Coffee to check it out. Coincidentally this was almost three years to the day after my original visit, during which time Rosslyn has become one of London’s leading speciality coffee shops.

You can see what else has changed, and find out more about the Off Menu Coffees, after the gallery.

I first visited Rosslyn Coffee in July 2018, just five months after it had opened, by when it was already making a name for itself as one of the City of London’s best coffee shops. Other than enhancing this already impressive reputation, little seemed to have changed on my return, except that the building was no longer clad in scaffolding!

However, if you look a little deeper, there have been some other changes, starting with the house coffee, which is now from Cornwall’s Origin. Originally, Rosslyn had a blend for milk-based espresso drinks, with guest coffees for other espresso drinks and for batch brew filter. Now there are three house coffees: a blend (for milk) and two single-origins, one for other espresso drinks with the second for batch brew. On pour-over, as was always the case, there’s a guest roaster, with some famous names from around the world gracing Rosslyn’s shelves.

There have also been some equipment changes, the most notable of which is the custom-built La Marzocco KB90, La Marzocco’s flagship machine. What makes this one special is that it is the only four-group KB90 anywhere in the world!

The biggest change, however, is the one that Rosslyn makes the least fuss about, the Off Menu Coffees. Indeed, had I not been tipped-off by Kirk, I might never have noticed, since the only clue is a fairly subtle QR code at the start of the guest coffees on the retail shelf. That said, if you get talking with the staff and they sense that you might be interested in something special, they’ll point you in that direction.

Like the Frozen Solid Coffee Project, Rosslyn’s Off Menu Coffees are vacuum-sealed and frozen in individual doses, then ground and brewed from frozen through the Kalita Wave (in Rosslyn’s case, using the Marco Beverage Systems SP9). The main difference is one of scale: whereas the Frozen Solid Coffee Project offers up to 30 single-origins at a time, Rosslyn has a much smaller freezer, which limits the menu. During my visit there were five coffees, while at the time of writing one of them (the Finca Buenavista from Blossom Coffee Roasters in Manchester) has finished and is yet to be replaced.

Like Tilt, Rosslyn uses the Off Menu Coffees to offer very rare coffees that might not be viable as a standard guest pour-over. During my visit, as well as the Finca Buenavista (a washed Colombian), there was a natural Ethiopian from Dublin’s 3fe, the El Vergel (a natural Colombian) from Manhattan Coffee Roasters in Rotterdam, the Takesi (a washed Bolivian) from Copenhagen’s Coffee Collective and the Uraga Gomoro (a natural Ethiopian) all the way from Toby’s Estate in Sydney.

With the help of the staff, I narrowed the choice down to the El Vergel (Manhattan) and the Uraga Gomoro (Toby’s Estate) before deciding on the Uraga Gomoro. While I’ve had coffee from all the other roasters (including Manhattan), I wasn’t sure when I’d next have the opportunity to drink something roasted by Toby’s Estate!

It turned out to be an excellent choice since while I was waiting for my coffee to brew, I bumped into Bethen, who I’d met at The Epiphany in Bristol in 2017. Bethen, a cake baker, now works for Rosslyn, and was trying the El Vergel, so she graciously let me try it, thus allowing me to taste both coffees. Both are naturally-processed with fruity notes, but more subtle than the punchy naturals I’m used to. I’m not going to pretend I got the specific tasting notes (persimmon, pomegranate, orange liqueur for the El Vergel; lychee, blackberry liqueur, fruit tea for the Uraga Gomoro) but both were outstanding coffees.

Like the Frozen Solid Coffee Project, Rossyln’s Off Menu Coffees are an excellent idea, providing an opportunity to try some unique coffees for those that want them. I look forward to seeing more coffee shops go down this route.

Since I visited Tilt and Rosslyn Coffee, I’ve learnt from fellow-blogger Bex of Double Skinny Macchiato that BUSI Cafe (also in London) uses a brew-from-frozen method, although in BUSI’s case, only a couple of coffees are offered at a time.

There’s a full write-up of Rosslyn Coffee, including a complete gallery, in its main entry. You can also see what I made of it in my original write-up, from July 2018.

December 2021: Rosslyn Off Menu Coffees was a runner-up for the 2021 Best Filter Coffee Award.

4 thoughts on “Rosslyn Off Menu Coffees”