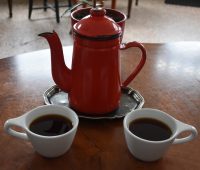 Just north of the famous Hallgrimskirkja in Reykjavik, the junction between Frakkastígur and Kárastígur forms a small, open square, roughly triangular in shape. A three-storey white building stands at its broad, southern end, home (since 2008) to the original Reykjavik Roasters, which occupies the ground floor. For almost 10 years, this neat little café was also the roastery, but in January 2018, roasting moved to a dedicated roastery in Auðbrekka in Kópavogur, freeing up much-needed space for seating.

These days, the original Reykjavik Roasters is a bustling café, by far the busiest of the three we visited in Reykjavik. There’s the usual Reykjavik Roasters offering, with a concise espresso-based menu, daily batch brew and a choice of single-origins on pour-over, with either an AeroPress for one or Kalita Wave for one/two. There’s tea, hot chocolate, a small range of cakes and pastries, plus equally concise breakfast and lunch menus. And plenty of coffee and coffee kit for sale!

Seating is at a premium, with as many takeaway orders as there are customers sitting in. Since Amanda and I were staying just a few minutes’ walk away, we became semi-regular visitors, popping in twice for breakfast and once for lunch.

Reykjavik Roasters stands at the top of the square, neatly sandwiched between Frakkastígur (to the left when looking at the café) and Kárastígurand (right). The building dates to 1929 and once housed a double store, which explains the two doors, one each on the front corners, with three large windows between them. Solitary windows down either side help make the front of Reykjavik Roasters a bright, open space, despite its bustle.

If you want to sit outside, there’s a solitary bench between the first and second windows, although no-one will mind if you take your coffee to the other side of the square which has plenty of spots where you can perch. Alternatively, head inside through the right-hand door (the left-hand door, which opens onto Frakkastígur, is exit only at the moment), where you can try to find an unoccupied seat.

Reykjavik Roasters is unusual in that it is T-shaped, with the doors at either end of the top of the T. The counter is in the middle, opposite the middle window, with the downstroke of the T behind it, where there’s more seating. To reach it, you have to go around behind the counter, normally the sole preserve of the baristas.

The main space is long and thin, with the seating around the edges. There’s a table in the window overlooking Kárastígurand immediately to your right when you enter, and another in the first window on your left overlooking the square, where the windowsill has been pressed into service as additional seating. The same applies to the second window, where the table is an upcycled sewing machine stand, with an old dresser acting as a water/takeaway station between the two windows.

Beyond this, a large opening in what used to be the party wall between the two stores leads to the smaller Frakkastígur side. This only has one window at the front, where you’ll find a pair of armchairs. Opposite this, against the back wall (where the roaster used to be) is a matching sofa, while there’s another table by the window overlooking Frakkastígur.

Back on the Kárastígurand side, retail shelves occupy the first part of the back wall, then comes the counter, pretty much in the middle of the shop, where you order and collect your coffee/food. Behind the counter, the downstroke of the T stretches out ahead of you, with a pair of armchairs on the left, a more formal set of comfy chairs on the right, and, at the far end, a sofa, which occupies the back wall next to the toilet. In contrast to the bright front section, the lighting here can best be described as subdued, offering a real contrast in seating.

Amanda and I visited three times, twice for breakfast at the start and end of our trip, and once in the middle for lunch. On all three occasions we had a combination of oatmeal porridge and sourdough toast with jam and cheese, although we had intended to have soup for lunch. However, the staff were out of soup that day, so we fell back on porridge! Both porridge (rich and creamy) and toast (tasty and crunchy) were excellent, while the jam (mixed berry) was awesome.

Our coffee was slightly more varied, with a combination of cortados and flat whites made with the Mariano, the house espresso from Brazil, along with a pair of single-origin pour-overs. In the cortado, the Mariano was fruity, coming strongly through the milk, while the flat white was richer and creamier.

For our pour-overs, we tried two different Colombian single-origins. The La Cascada was my favourite, a lovely, sweet, delicate and fruity coffee, while Amanda, always more discerning than me, got cacao nibs and blueberry, although she preferred the El Volcan which we had at Brautarholt. Our final pour-over was the Las Mercedes, a rich, smooth, full-bodied coffee with tasting notes of dark honey and lime.