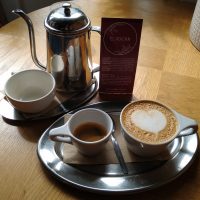 As Bex put it in her Reykjavik Coffee Guide (from 2016) “Reykjavik Roasters will probably be the first port of call for any speciality coffee connoisseur”. So it was for Amanda and I, the intervening five years not having changed that particular pearl of wisdom. These days there are four Reykjavik Roasters, with three in Reykjavik proper, and for once I visited them in order of seniority, although the first one I’m writing up, on Brautarholt, is the second location, which opened in 2015.

Located slightly east of the compact heart of the city, in what feels like a fairly modern part of Reykjavik, Brautarholt is only a 20-minute walk from the centre. It’s on the ground floor of an apartment building, occupying a large, L-shaped spot with plenty of seating, being easily the largest of the three Reykjavik Roasters that we visited. Like all the Reykjavik Roasters, there’s a concise espresso-based menu, daily batch brew and a choice of single-origins on pour-over, with either an AeroPress for one or Kalita Wave for two. There’s tea, hot chocolate, a small range of cakes and pastries, plus equally concise breakfast and lunch options. And bags and bags of coffee for sale!

On the corner of Stórholt and Brautarholt, Reykjavik Roasters occupies an L-shaped space. The shorter side is on Brautarholt, with two large picture windows to the left, while to the right, on Stórholt, Reykjavik Roasters boasts two slightly wider windows. An internal, square entrance porch stands right on the corner and, in an attempt to maintain a sense of equanimity, it has a door onto each street. It also doubles as a retail area, with bags of beans in front of you and coffee equipment to your left.

Stepping inside, the layout’s quite simple. Taking Brautarholt as the front, the seating is organised in two wings, one to your left, running down Brautarholt, and the other directly ahead, running along Stórholt. The counter, meanwhile, matches this, standing in the corner opposite the door, a short side (where you’ll find the pour-over) to the left, with a longer side at 90° to it on the Stórholt side. This is where you order, before taking a seat, where your coffee will be brought to you.

If you sit on the Brautarholt side, you’ll find a row of four tables, two per window. Each window has a wooden bench-seat, while each table has two chairs, one at either end, rather than the traditional position opposite the window, so you can seat three or maybe four per table. The bulk of the seating, however, stretches out ahead of you along Stórholt, starting with a pair of armchairs in the corner by the entrance porch. This is followed by a row of five two-person tables on the right, two (plus the armchairs) in the first window and three in the second.

There’s a second row of seating down the middle, starting with a tall, eight-person table opposite the counter. This is followed by a two-person table, then a square, four-person table with curved corners, which are separated from the toilets (beyond the counter in the left-hand wall) by two floor-to-ceiling display cases.

The overall effect of the windows (combined with very high ceilings) is a large, bright, open space. Plenty of plants add a touch of greenery, while the best feature is the back wall, which is entirely occupied by a colourful mural offering advice on tasting notes.

Amanda and I were there for afternoon coffee and cake. I went for the Eitt Sett, a one-and-one with the house espresso, served as a single-shot espresso and single-shot cappuccino, while Amanda and I shared a Kalita Wave for two. The pour-over choices change every week or so. We had a selection of the La Cascada and the El Volcan, going for the latter, a washed coffee produced by Chalo Fernandez in Colombia.

We paired our coffee with a couple of the cakes, a long, thin one and a round, domed one (apologies for not getting the names!). The long one had an almond macaroon centre on a sponge base, while the other had a biscuit base with a chocolate mousse filling, both topped with chocolate and both proving to be delicious.

The El Volcan was the real hit though, particularly with Amanda. Very smooth, sweet and fruity, it was just as good cold (we took our time) as it was hot. Amanda says the tasting notes of apples and spices are spot on, except she would say “dry” rather than “dry bitterness” when it comes to the finish. Regardless, consider us both converted!

December 2021: Reykjavik Roasters, Brautarholt was a runner-up for the 2021 Best Filter Coffee Award.

You can see what fellow blogger Bex made of Brautarholt in her Reykjavik coffee guide, while you can also check out what Amanda and I made of the original Reykjavik Roasters on Kárastígurand and the third Reykjavik Roasters inside the Ásmundarsalur art gallery.