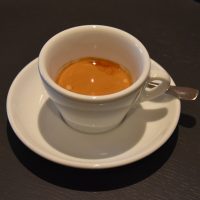 Welcome to the latest addition to Reykjavik’s speciality coffee scene, Kaffi Ó-le, which officially opened today, although Amanda and I were lucky enough to visit during its soft opening when we were in Iceland last week. Located on Hafnastraeti in the heart of the city, it’s in the same building as the Radisson Blu 1919 hotel, with direct access from the lobby, although it is a completely separate business with its own entrance from the street. Kaffi Ó-le is the brainchild of Tom, a former manager at Reykjavik Roasters. Despite not having opened, it was recommended by everyone we asked in other coffee shops (including an ex-colleague who described him as “the best boss ever”).

In a city dominated by roaster-owned coffee shops, Kaffi Ó-le uses Kaffibrugghúsið, a speciality roaster located on the other side of the harbour. There’s a single-origin on espresso, with shots pulled on a gorgeous-looking Dalla Corte XT, plus another single-origin on batch brew, with a selection on pour-over, made using the Kalita Wave or Chemex on the Tone Touch 02 automated system. If you’re hungry, there’s a range of grab-and-go sandwiches, plus cakes to back up the coffee, although these weren’t available during our visit.

Kaffi Ó-le is in the heart of the laidback centre of Reykjavik, two streets back from the eastern end of the old harbour. One of several spaces off the lobby of the new Radisson Blu 1919 hotel, it’s accessible via a broad flight of steps immediately to your left as you enter the lobby. Alternatively, it has its own door direct from the street, just to the left of the Radisson, although, as you’ll see from the photos, the steps were in the process of being finished off when we visited last week!

Kaffi Ó-le has two tall windows at the front to the left of the door, each with a low bench outside on the pavement and a two-person window-bar inside. The L-shaped counter has the espresso machine facing the front, while on the right-hand side, there’s more seating in the shape of three tall bar-chairs. Finally, a ten-person communal table sits opposite the counter on the right.

Access to the back room is via a broad opening on the right-hand side of the back wall. This smaller space, about one-third the size of the main room, has two three-piece suites, each consisting of a two-person sofa on the left facing a pair of armchairs on the right, a low coffee table in the middle. What look like a pair of windows and a doorway in back wall are in fact mirrors which make the space seem much bigger than it actually is.

Kaffi Ó-le has invested in all the latest equipment, starting with the gorgeous-looking Dalla Corte XT espresso machine, which comes with a DC One grinder. This is connected to the espresso machine, which feeds it information about how the shots are running, the grinder then automatically adjusting the grind size to compensate! The automation continues with the Tone Touch 02, which has a batch brewer on the left and an automated pour-over maker on the right, allowing a single barista to simultaneously make multiple orders.

Kaffi Ó-le currently offers four seasonal single-origins from local roaster Kaffibrugghúsið, all available as pour-over. One of these, a washed Ethiopian from the Benti Nenqa washing station in the Guji region, is currently on espresso. I had this, a well-rounded double shot with a pleasing acidity, although Amanda also got notes of violets and citrus. The tasting notes were of mango, flowers, almonds and cream, if on-line translation tools are to be believed (mangó/blóm/mandla/rjómi in the original Icelandic).

Amanda, meanwhile, had the same coffee as a pour-over through the Kalita Wave. I found it to be a very gentle, well-rounded coffee, while Amanda really enjoyed it, getting the same notes of violet and citrus, with lilac added into the mix. I also had a flat white to go later in the week, the Ethiopian combining well with the milk to produce a lovely, smooth flat white.