If you cast your mind back to this time last year, you will remember the inaugural Coffee Stops Awards, set up by Chris Ward to promote all that’s good about the independent coffee sector. Back then, the Awards just covered London, but fast-forward to this year, and Chris has rolled them out to cover the entire UK, more than enough reason to get behind the Awards and give them some support!

However, those with good memories will also realise that I have a vested interest, since in 2014, I was in the running for the Best London Coffee Blog Award, eventually finishing second behind the winner, Daniel of Cups of London Coffee. This year Daniel and I are back, this time in the expanded category of Best Media for Coffee, where we’re up against some seriously stiff competition, including professional publications such as Caffeine Magazine and Time Out, plus apps such as London’s Best Coffee.

There are 10 categories in this year’s awards and you can vote once per day in each category.  Voting closes at 4pm on Wednesday, May 13th, so if you want to have your say, you’ve got a whole week to get your voting done.

You can read more about the Awards after the gallery, which is from last year’s Awards ceremony.

There are ten categories in this, the second Coffee Stops Awards. These are listed below, along with last year’s winners (although remember that the winners last year were for the London, not the UK). If you click on the link for each category, it will take you directly to the voting form.

As I might have mentioned, I’m in the running for the Best Media for Coffee Award and I’m up against some stiff competition this year in an expanded category, which includes professional publications and apps. In contrast, other than my Coffee Spot Calendar, I make no money from running the Coffee Spot.

Since last year’s Awards, I’ve posted 193 articles on the Coffee Spot, covering 123 Coffee Shops from all over the UK (and abroad) and it’s all done for the love of good coffee.

It would be remiss of me if I didn’t ask you to take a look at the other contenders, since there are some very worthy publications in there, but if you could, I’d be very grateful if you voted for me. You can vote once a day between now and 4pm on Wednesday, May 13th (eight days in all) and it would mean a lot for me if you could vote every day.

I’d also encourage you to vote in the other nine categories. Vote as often as you can and remember, the whole point of the Awards is to support the independent coffee sector in the UK, a worthwhile cause.

If you’re having trouble finding (and hence voting for) your favourite coffee shop, here’s a trick I’ve discovered. Type the name of the coffee shop you’re looking for into the search box on the home page and wait for it to appear in the drop-down selection list. 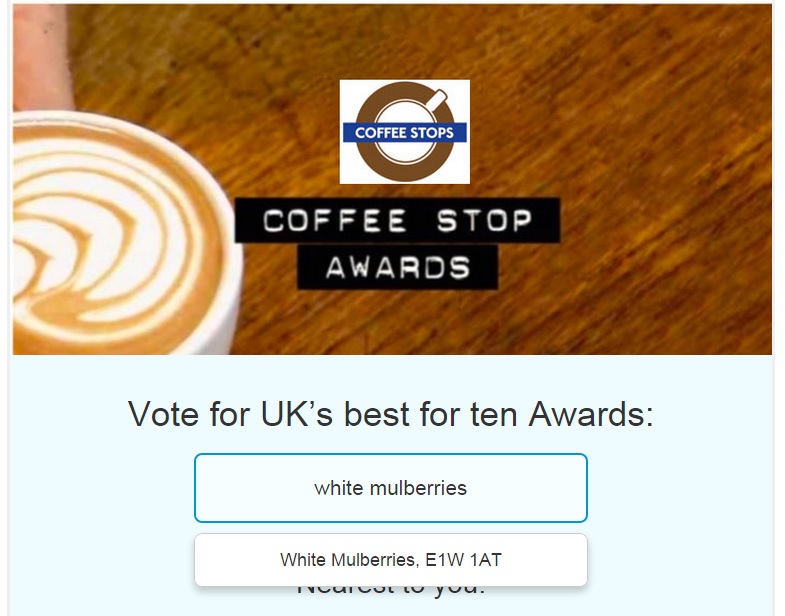 You need to click on the coffee shop in the drop-down list, which will bring up the categories it has been entered for. Then all you have to do is select the category and you’ve voted. Simple as that. 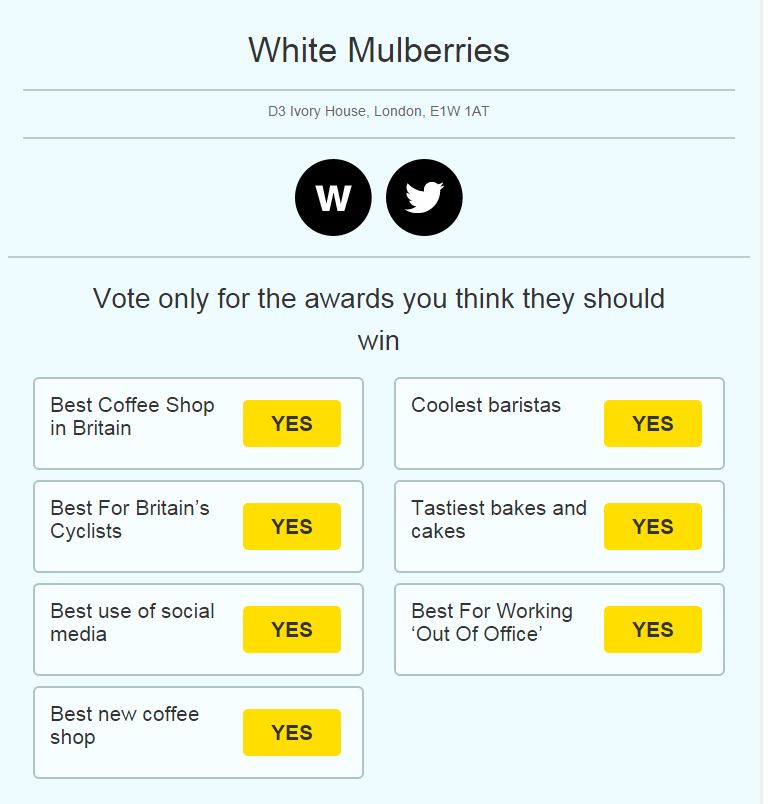 The winners will be announced at this year’s Caffè Culture Show on the evening of Wednesday, 13th May, so you won’t have long to wait to find out who won. Naturally, I’ll be there to let you know!