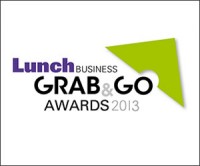 Regular readers will know that back in June I was in Attendant when I ran into Maria Bracken, Deputy Editor of Lunch Business. The short story is that Maria got me to nominate various Coffee Spots for the 2013 Lunch Business Awards (if you’re interested, you can read the long story here). Although the Awards remit stretches much further than just the humble coffee shop, two categories fell very much within my remit: Best Tea Experience and Best Coffee Experience.

I got my thinking cap on and ended up nominating a host of places. Fast forward a couple of months and the shortlists were published. In the Best Tea Experience category, I was delighted to find North Tea Power shortlisted, along with Harris & Hoole, and Edinburgh’s Eteaket. However, the best was still to come as the Best Coffee Experience shortlist was Cafe Boscanova, Flat Caps Coffee & Freemans Coffee, all places I’d nominated!

Fast forward another month or so and I found myself at the London Art House in Islington for the awards ceremony, which took place on Thursday, 26th September, as part of the Lunch! Show.

You can find out who won after the gallery.

Before I reveal the winners (unless you’ve already had a look at the gallery, of course, which rather gives the game away), I’d just like to thank Maria Bracken and her team, both for inviting me and for running an excellent awards ceremony. With my other hat on, I’ve been to many professional awards ceremonies over the years and they are usually tedious affairs. Not so the Lunch Business Awards, which was a delight to attend.

You can find the full list of winners here. The two awards which I had a vested interest in were the Best Tea Experience and Best Coffee Experience. First up was Best Tea Experience and the winner was Edinburgh’s Eteaket. While I was a little disappointed that Wayne and Jane from North Tea Power hadn’t won the award, I was delighted that it had gone to Eteaket. I’ve heard nothing but good things about Eteaket and look forward to visiting the next time I’m up in Edinburgh.

Next up (for me) was Best Coffee Experience. I was particularly interested to hear that the judges had said that this category was particularly tough to judge. Given the shortlist, I’m not surprised since I’d struggle to decide between those three! Each is wonderful and yet each offers a very different experience. In the end, the award went to Café Boscanova and I was able to catch up with Joel, Jamie and Noel at the end of the event. They seemed in equal parts delighted and bemused to have won, but you can take it from me that it was thoroughly deserved. My visit to Café Boscanova still stands as one of my highlights from the Coffee Spot’s first year.

Two other awards caught my eye. Cook & Garcia, an artisan deli on Richmond High Street, picked up the Best Independent Outlet award and is somewhere I’m going to have to check out. I’d not heard of Cook & Garcia before, but it looks lovely and clearly is doing something right! It’s only been around since May 2012, but has already picked up two national awards. With some delicious looking cakes and coffee from Union Hand-roasted, I can see I’m going to have to pay it a visit!

The other award that caught my eye was the Innovation Award, which went to Paper & Cup, somewhere I’ve been aware of, but clearly haven’t really paid enough attention to. Paper & Cup offers a couple of intimate spaces in Shoreditch and Bow, with an intriguing combination of coffee, cake and books. It’s a not-for-profit social enterprise created by the Spitalfields Crypt Trust, a locally-based charity organisation. It’s sounds a fascinating idea and is another place I’ve added to my list!

So, that’s it from the Lunch Business Awards for this year. I’ve already got my thinking cap on, wondering who I’m going to nominate for the 2014 awards!