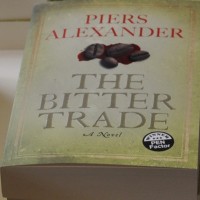 Today’s Saturday Supplement is something rather different. This week’s theme has been one of new openings: on Monday, we had the new Workshop Coffee in Fitzrovia, while on Thursday, it was the turn of the latest Beany Green on the South Bank. So today I’m continuing this theme with a book launch.

Last week (Thursday, to be precise), I was invited to Prufrock Coffee for the launch of “The Bitter Trade”, a novel by Piers Alexander. Set in the late 17th century, it’s a story of mystery and intrigue that’s largely set in the London coffee shops of the period (hence the interest and why Piers was kind enough to invite me). I had a lovely evening and thought that you, dear readers, might like to find out what I got up to. I’m also indebted to Alex, aka liquidjolt, for bringing me to Piers’ attention in the first place!

Let’s start with the novel itself. First of all, a confession. I haven’t actually finished reading it. It’s a large book and I’m about a quarter of the way through. However, I have read enough of it to know that it’s well-written, with interesting characters and an intriguing story that leaves me wanting to know more. I’ve also read enough of it to heartily recommend it (if you like that sort of thing). Rather than repeating the blurb on the book, you can read what Piers himself says about the novel which should give you an idea of whether you’ll like it or not. If that’s not enough, there’s a sample chapter on his website that you can download. Just a word of warning though; it’s full of sex and violence, so it’s not for the faint-hearted!

So, rather than go on about the book, I want to tell you about the launch itself, a fascinating, fun-packed evening that was hosted by Prufrock Coffee, with Piers’ brother, Roland Bearne, acting as Master of Ceremonies. Piers was keen to recreate the atmosphere of a London coffee house from the late 17th century (the novel is set in 1688), so we got things underway with some communal singing led by the excellent Vivien Ellis. We sang some typical coffee house songs of the period with musical accompaniment by Clare Salaman.

Once we were suitably warmed up, we were handed over to Dr Matt Green who runs the fascinating Coffeehouse and Chocolate House tours, which cover London’s original coffee/chocolate houses. Matt attempted to give us an idea of the typical coffee house of the period which seemed to be more of a source of gossip than anything else. As well as paying a penny entrance fee, you had to provide a piece of news or gossip (the more fantastic, the better, it seemed) before you were allowed to sit down! Matt also made the (plausible) claim that with the advent of the coffee house came the Enlightenment, since thinkers of the day were no longer permanently drunk (beer being the alternative drink, since the water itself was too filthy to drink)!

During a short break, Jeremy Challender of Prufrock made some coffee using typical 17th century techniques. As far as I can tell, this consists of putting ground coffee in a big jar and pouring boiling water on it, although I’m sure there was more to it than that! Matt had previously described the coffee of the period as “shit”, but I have to say that the brew that Jeremy came up with was much more palatable! Jeremy was using a Reko Yirgacheffe from Square Mile and he came up with a pretty tasty brew. The only thing you had to watch out for was sediment at the bottom of the glass; no straining or filtering here!

Finally, it was onto the main event, with Piers reading a couple of extracts from “The Bitter Trade”. I have to say that Piers read extremely well (not always the case with authors reading their own work) and I was extremely impressed with the quality of the novel, so much so that I bought a copy there and then!

5 thoughts on “The Bitter Trade”