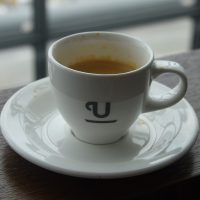 Let’s start with my flight back, which you can read about after the gallery.

I ended up having three coffees on my flight back from Tokyo, one made by the cabin crew at the start of the flight, and another after the first meal. The third, which was sort of bench mark, I made myself, using my Aergrind, Travel Press and a Brazilian single-origin from Peixoto in Arizona (a gift from a colleague).

As I noted in my original piece, making coffee during flights brings with it an interesting set of challenges which Geoff and I discussed when we met up. For now, let’s just say It’s not easy. I ordered my first coffee pretty early on in the flight and it’s possible that the coffee was made (or at least the pot brewed) especially for me. The result was pretty good, very drinkable, and certainly a cut above the average airline coffee (although that’s not a very high bar).

However, I was pretty pleased with it, pleased enough to order a second coffee after lunch. This, however, highlighted one of the major problems that faces Union/British Airways: consistency. It wasn’t horrible, but it was nowhere near as good as the first, tasting on the thin side. Let’s call it disappointing. Quite why that was, I don’t know. Maybe it’s simple variability in the equipment, or a different member of crew made it or it was made during the lunch service, when everyone was a bit more rushed.

For me, this highlights that making coffee in the air is, I said at the start of the piece, challenging. If you’re going to compare the coffee you’re served on a plane to a batch-brew filter you get in a good coffee shop, you’re going to be disappointed. Instead, take it for what it is, and there’s a good chance you’ll be pleasantly surprised.

So that was the in-flight coffee? But how did the lounge coffee shape up? You can find out after the gallery.

When I got back to Heathrow, I had time to kill before my flight to Manchester, so I headed back to the north lounge in Terminal 5, ending up pretty much at the same seat I’d had on the way out. More importantly, I was back at the same coffee machine, where I’d had a surprisingly good espresso. Although I should, for comparison purposes, have had another one, instead I decided to try a cappuccino, wanting to see how the coffee went in milk.

I should start by saying that I didn’t heed my own advice from the opening section. When it comes to milk-based drinks, perhaps even more than espresso, I’ve been really spoiled. I drink flat whites in some of the best coffee shops going, made with superbly-steamed, micro-foamed milk, rich, dense, creamy and smooth, which is just how I like it.

This was never coming to be something that a bean-to-cup machine of the sort being used by British Airways was going to be able to produce. It was an unfair comparison, the milk being far too foamy for my tastes. In future, I think I’ll just stick to espresso.

That said, I then went back to try the espresso and I wasn’t that impressed. Although I didn’t time it, the extraction seemed too fast for me and the resulting espresso was more bitter than I remember it and thinner too. Maybe, after my positive experiences the first time around, I had set the bar too high, but whereas before I had been pleasantly surprised, here I was definitely disappointed.

It was with all these experiences in mind that I set off the following week to meet Geoff at Union, which you can read about after the gallery.

When I met up with Geoff, we started with a quick tour of Union’s facilities. These include Campus, where Union hires out slots for others to come in and roast, a useful facility for smaller roasters who want to get started without having to invest in their own equipment/premises. For this, Union has a dedicated 1kg Giesen sample roaster and a larger 15kg Giesen for production roasting.

Another part of the Union operation is micro-lots and other smaller single-origin batches which you are likely to find in speciality coffee shops. These have their own production area and used to be roasted on a 12kg San Franciscan. However, a brand new 40kg Loring had just been installed that week, significantly boosting Union’s capacity.

Union also has tasting and quality control labs, two full training suits and offices for the admin required to support all this. However, pride of place goes to the main roasting facility, which occupies the bulk of Building One. This houses two 120kg Probat roasters, affectionately known as Probat One and Probat Two (my kind of naming scheme). Despite the size of the machines, these are still operated by hand, with the coffee bagged up on the opposite side of the room. Although Union uses automated bagging machines, this is still a very manual process, probably the most manually-intensive part of the whole operation.

After the tour, we chatted all things British Airways. Geoff told me that the programme had taken two years to develop and roll out. Some have been quick to criticise Union for exposing its coffee to a less well-controlled, more mass-market setting (the theory being that as a roaster, your coffee is only as good as the person who makes it, so you should only sell coffee to a small niche in the speciality market). However, Union’s approach in over 15 years in the business is to grow the market for speciality coffee, which means supplying coffee to non-traditional (for the speciality market) outlets, British Airways being the latest example.

The first step was to select a producer. Having been one of the pioneers of direct trade, Union wanted to work with an existing producer to fulfil the contract. One of the consistent messages from coffee farmers is that the best way to support speciality coffee is to buy more coffee and, contrary to some of the more ill-informed criticism of Union’s partnership with British Airways, the contract was a welcome boost to the Peruvian producers that Union selected.

After selecting the producer and working with them to ensure that the farms could meet the demand, the next step was to develop the roast. British Airways has three different coffee offerings and Union uses the same coffee for all three: the bean-to-cup machines in the lounges, filter coffee in Club World and espresso in First Class. Each requires a different roast, plus an understanding of how air pressure and water temperature affect brewing in the air.

The final aspect is training. British Airways has 14,000 staff who work with coffee, and all of them need training, a mammoth undertaking, particularly when it comes to cabin crew, where making coffee is just one of many, many duties they undertake.

With that in mind, we talked about the experiences I’d had of the coffee so far, which highlight some of the challenges that Union and British Airways face. In the lounges, for example, the bean-to-cup machines are pretty sophisticated, with sensors that adjust the grind size in response to the environmental conditions throughout the day. However, most of the machines are four years old and some are starting to show their age.

The differences between the espressos I had at the start and end of my trip could simply be down to environmental factors: I did, after all, arrive back during one of the hottest and stickiest days of the year. As every good barista knows, temperature and humidity has a big impact on grind size and brewing and it maybe that the machine simply wasn’t coping too well.

When it comes to in-flight coffee, there’s a range of different equipment on various aircraft, all of which is very specialised. It’s not as simple as taking an off-the-shelf commercial bulk-brewer and putting it in the galley. All the equipment on planes has to be vigorously safety checked, plus the coffee brewers have to cope with the lower air pressure and commensurate lower boiling point of water. Then there’s the water itself, which, as every good barista knows, can make or break your coffee, plus how well the machines are cleaned and maintained.

I’m not making excuses, but it’s fair to say that these are early days for British Airways and Union and I think that consistency is going to be an issue to begin with. However, as the programme is rolled out, training takes effect and British Airways collective coffee knowledge improves, consistency should steadily improve.

I’ll end by repeating what I said at the end of my original piece. Both British Airways and Union need to be congratulated, not knocked, and for this partnership. Extending the market for speciality coffee is undoubtedly good for producers and something they are pressing for, while improving the quality of airline coffee is also a good thing for passengers and has to start somewhere. Hopefully the rest of the industry will follow suit!