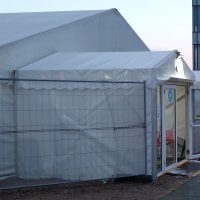 This is not a Travel Spot that I particularly wanted to write, since it very much ended what had otherwise been a very good journey on a down note. Exactly two weeks ago, I landed at Heathrow having flown back from Boston with British Airways at the end of my trip to Atlanta (Georgia) and Portland (Maine). However, that wasn’t quite the end of my journey. On arrival in the UK, everyone has to take a COVID-19 test within two days, with the test booked in advanced. When I left the UK, the requirement was for a lateral flow test, but during the trip, this was changed to a PCR test.

That in itself was nothing new: I’d taken a Day 2 PCR test on my return from Iceland. There was, however, one crucial difference. Another rule change means you now must self-isolate until you’ve received a negative test result. That wouldn’t have been an issue had my PCR test result come back within the stated 48 hours. Unfortunately, it didn’t. And the rest of the process, with the honourable exception of the staff at the testing centre, was a complete shambles, my problems starting as soon as I left the terminal.

You can find out what happened after the gallery.

I’d decided to book my Day 2 PCR test at the airport, going with Collinson, which I’d used for my pre-flight lateral flow test on the way out to America. There were various reasons for this, but it all revolved around my plans to travel to my Dad’s the following Monday, just over 48 hours after my arrival at Heathrow, so I booked a test for 07:30 which should (in theory) have allowed enough time for my test result to come back before I left for my Dad’s

The first problem I had was getting to the Collinson test centre. Rather than being in one of the terminals, it’s just off the Northern Perimeter Road, at the eastern end of the airport. However, when I’d booked the test, I’d been reassured by a note I found on the website which said that there were regular shuttle buses between Terminal 5 and the test centre.

Foolishly, I didn’t make a note of the bus stop number, although I remembered it was in the high 20s. Naively I thought that I could walk out to that part of bus station outside Terminal 5 and easily find it. Sadly, I was very mistaken. It turns out that I did go to the correct part of the bus station and even walked past the stop (No. 25) four times, but there was nothing to tell me which was the correct stop.

When I left the terminal, it was 07:00 and I was ahead of schedule thanks to my flight’s early arrival. After fruitlessly walking up and down, carrying all my bags, and failing to find the bus stop, I was beginning to get worried. There was no-one to ask and no way of contacting Collinson (no phone number and an unresponsive chat bot, with What’s App, which I wasn’t about to install, the only other option).

Trying to navigate Collinson’s website on my phone was very frustrating and looking up the testing centre’s location and directions provided no useful information. I eventually found the bus stop number, after I’d got back from my test, buried deep in the FAQ, but even if I had known it, I’m not sure it would have helped, since there was no sign at Stop 25 to indicate that it was for the Collinson shuttle, nor, in the 20 minutes I spent wandering about, with the bus stop in sight at all times, was there a shuttle bus.

By this point, I was getting desperate and, with the rest of my week hinging on the test, I decided that I couldn’t just keep hoping that a shuttle bus would turn up. Better, I thought, not to miss my test, so I got a black cab from the taxi rank. After all, it was only a ten-minute drive along the Northern Perimeter Road, so it wasn’t going to cost me that much.

It turns out that I was wrong about that as well, with the cab costing a staggering £20 to go just 5 km! It’s been a long time since I’ve taken a black cab, which might explain why I was so surprised at the price, but based on the experience, it’s going to be a very long time before I take another one!

However, I’d made it to the test centre, roughly on time. What else could go wrong? Find out after the gallery.

I’d been to the Collinson test centre once before, when I took my pre-flight lateral flow test. It’s on a rough patch of ground, riddled with potholes, and consists of a couple of large tent-like structures (although they feel more permanent and weatherproof than that implies). My previous visit had been by car, when I’d parked up, walked in and had my test done with the minimum of fuss.

This time, however, I’d just arrived from the terminal with all my bags and was beginning to realise some of the site’s serious shortcomings. To start with, there was nowhere to put my bags, other than outside, on the wet ground, exposed to the elements. Fortunately, it had stopped raining at this point, but even so, it was a pretty grim, dark morning.

A solitary member of staff greets everyone outside the entrance and checks you in. When you book, you get an e-mail with an order number, confirming the order, a second e-mail confirming the appointment, and a third e-mail with the code for the passenger locator form. What I hadn’t realised is that neither the order number nor the passenger locator form code is sufficient to let you take the test. For that, you need a third code which you can only get by registering for you test, which requires filling an online form (with much of the same information you provided on booking). Once you’ve done that, you get the registration code, which lets you take the actual test.

Now, in fairness to Collinson, the third e-mail (the one with the code for the passenger locator form) does actually say that you need to register, and provides a link, but I’d missed this. I hadn’t needed to register for my pre-flight lateral flow test, instead just receiving the registration code by e-mail, so it hadn’t occurred to me that there would be another hoop I’d have to jump through.

When I turned up with my order number and passenger locator form code, I was told no, that wasn’t enough. Instead I had to register, which I did standing outside in the cold and the dark (at least it wasn’t raining) because without the registration code, I wasn’t going to be allowed in. Of course, I had to do this on my phone, which was a pain, since I needed to look up lots of bits and pieces of information (which I’d already provided when I’d booked) on said phone, all while standing outside in the cold and dark. Oh, and having just come off a transatlantic flight, not having slept for 16 hours.

Why Collinson has come up with such a convoluted booking/registration process, I don’t know. I appreciate that I should have read the email more carefully, but I wasn’t the only one who was caught out by it, since there were several other people also standing outside with their phones. However, after battling through multiple screens, I finally entered all the information, got my registration code and was let inside.

You can find out what happened next after the gallery.

In fairness, once I (and all my luggage, which I was not going to leave outside in the wet) made it inside, things went really smoothly. I also want to say that I was very impressed with the patience and professionalism of the staff at the testing centre, who are a credit to Collinson. It’s not their fault that they’ve been encumbered which such a ridiculous, bureaucratic process.

I had to show my passport and registration code at the front desk, getting a sticker with a barcode in return. I took this through to the second part of the testing centre, where I gave it to the nurse who did the test. Then, a couple of minutes later, I was on my way outside again.

The next challenge was to get back to the terminal so that I could catch the RailAir coach home to Guildford. The good news was that I’d managed to establish that there was a shuttle. The bad news was that there was nowhere to wait, other than standing outside in the cold, surrounded by puddles, with nowhere to put my bags. On the plus side, the sun had risen and it was shaping up to be a fairly nice day.

The “shuttle bus” duly turned up, except that it was actually a fairly small people carrier with six seats in two rows of three facing each other in the back, hardly ideal when you are supposed to be socially distancing/self-isolating until your result comes back! Fortunately, there was one other passenger going to Terminal 5, which was just as well, since the two of us and our luggage pretty much filled it up.

At 08:00, I was back at Terminal 5, but there was one final sting in the tail. Collinson variously promised the results by the following evening (Sunday) or within 48 hours (8 o’clock Monday morning), either of which would have given me enough time to travel to my Dad’s later on that Monday.

Sadly, both Sunday evening and Monday morning passed with nothing from Collinson, plus there was still no way of contacting anyone (the chatbot merely referred me back to the contact form, which I duly filled in at lunchtime on Monday). The first I heard from Collinson was on Monday evening, when a stock e-mail arrived with an “apology” and an expectation that I’d received my test result within the next 12 hours.

That would have meant getting my result first thing Tuesday morning, which would still have been okay. I could just push my journey to my Dad’s back by a day. However, Tuesday morning came and went with nothing, so I filled out another contact form on Tuesday lunchtime and sent off a flurry of angry tweets (there were plenty of those on the Collinson twitter feed). I’m sure it was a coincidence, but 30 minutes later, my test result arrived (thankfully negative), 80 hours after the actual test. By then it was too late to travel to my Dad’s that day and, since I had work calls on Wednesday and Thursday, I had to push it back to Friday. Thanks, Collinson.

Finally, I’d left Collinson a rather scathing TrustPilot review, which Collinson replied to on Thursday, inviting me to apply for a refund, which I did. That was a week ago. I think you can guess what’s happened so far.

One of the reasons I waited a week before writing this post was to give Collinson time to make (partial) amends for the testing shambles, but sadly even that task seems beyond the company. I got a stock e-mail back acknowledging the claim, but, so far, that’s all I’ve received. I’ll let you know if I eventually get anything, but don’t hold your breath…