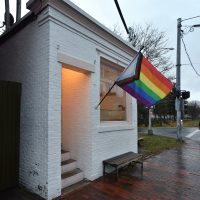 I’ve been a fan of Little Woodfords in Portland, Maine, ever since I first visited in the summer of 2019. I was therefore rather worried when I heard, in July 2020, that it was forced to move from its original location in Woodfords Corner to a much smaller spot on Congress Street in downtown Portland. Fortunately, while this has meant an inevitable change of character, the friendly, inclusive welcome of the original, plus the awesome coffee from Vermont’s Vivid Coffee Roasters, remains as Amanda and I discovered on our visit last month.

The offering is much as it was as before, with a single option on espresso, batch brew and flash brew (a pour-over over ice, akin to a Japanese iced coffee). The coffee changes on a seasonal basis, and there’s also tea, hot cocoa and several latte-based specials. If you’re hungry, there’s a small, vegetarian/vegan breakfast menu, with various toppings on bagels/biscuits. While Little Woodfords has a small indoor seating (standing?) area at the front, it’s currently takeout-only due to COVID-19, although you’re welcome to sit outside, where you’ll find a bench out front, with a couple of picnic tables down the side, which catch the afternoon sun.

Little Woodfords was one my finds of 2019 when I visited Portland, Maine that summer. I returned in March 2020, when I wrote it up for the Coffee Spot. It was a lovely, friendly, sunlight-filled spot, with plenty of seating, a concise breakfast menu and some awesome coffee. I say was, because in July 2020, Little Woodfords was forced to move from its original location in Woodfords Corner when the landlord doubled the rent.

Fortunately, Little Woodfords found a new space almost immediately, moving to Congress Street at the eastern end of downtown Portland, putting it in the heart of the city’s small but thriving speciality coffee community. A ten-minute walk to the north is the Tandem Coffee Roastery, while Speckled Ax on Thames to the east and Bard to the south are even closer. Meanwhile, a 15-minute stroll west along Congress gets you to the original Speckled Ax.

Little Woodfords is on the south side of Congress, on the corner with Franklin Street, the wide, dual carriageway which slices downtown Portland in two. Occupying a small, single-storey brick building, painted white with pink door and window frames, it immediately jumps out at you. Long and thin, the narrow front faces Congress Street, while there’s a small, grassy area between it and Franklin Street to the right, home to a couple of picnic tables. Meanwhile, a solitary bench sits under the window to the right of the door.

Access is via a recessed door at the top of a narrow flight of four stone steps on the left-hand side. Little Woodfords is split roughly in two, with the front half, which ends at the counter, for the customers, while the rear contains the open kitchen. You  enter halfway down the front section, with the counter ahead, while behind you and to the right, a narrow bar runs down the right-hand side and across the large, square window at the front. There are also two small, arched windows in the right-hand wall, one for each half.

The bar acts as the seating (or possibly standing), offering views from the two windows. For now, however, COVID-19 restrictions mean that Little Woodfords is only offering takeout service. A one-way system leads to the left, past the retail shelves, to the counter, where you order and collect your coffee/food. You return on the right, following the bar all the way to front, where you loop around back to the door.

Despite its small size, Little Woodfords is offering pretty much the same breakfast menu (plus cakes and pastries) that it did in the original, where I’d previously enjoyed both the fried egg and cheese on a biscuit and the avocado toast (toasted bagel topped with a whole sliced avocado). This time, Amanda and I just popped in for coffee, which is from Vivid Coffee Roasters in Vermont. I also bought a bag of the Bulga, a naturally-processed Ethiopian Heirloom coffee from Oromia in the Sidama region, which I brought home with me as a gift for the folks at Kafi in London.

Little Woodfords is currently using the Sugar Shack signature blend, which I had as an espresso in my HuskeeCup and which Amanda had in a latte (Little Woodfords is only serving in disposable cups for now, so don’t forget to bring your own). In Amanda’s latte it was very smooth, but I preferred my espresso, which was well-balanced and rounded, with a pleasing hint of acidity.

December 2021: Little Woodfords was a runner-up for the 2021 Brian’s Coffee Spot Special Award.