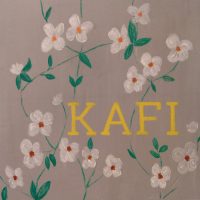 Kafi opened in April this year, joining a long list of excellent coffee shops in Fitzrovia, that small slice of central London between Oxford Street and Euston Road. While small, it has high ideals, including a dedication to sustainability, which includes soucing 90% of the material in the shop from recycled or reclaimed material, plus an emphasis (where possible) on local sourcing.

This is allied to a coffee offering of the sort that’s rather rare in London these days. Switching every month between house-roaster, Workshop, and a guest roaster, there’s a range of single-origin coffees, each matched to a specific extraction technique, including espresso, V60, Aeropress and syphon. There’s also cold brew, nitro cold brew, hot chocolate, a choice of 10 teas (plus cold brew, nitro cold brew tea options) and a series of wellness drinks. Finally, if you’re hungry, there are all sorts of cakes and savouries to enjoy.

June 2020: Kafi has reopened, although it is only offering takeaway services only at the moment (that said, you can sit outside if you want). You can see what I made of it when I visited in July.

Kafi occupies a small spot on the eastern side Cleveland Street. The front is almost all glass, the door on the left, a single, three-paned window on right, which runs almost floor-to-ceiling, with a pair of benches outside. Inside, Kafi is almost square, the counter occupying the back third of the shop. A narrow, eight-person table sits in the middle, leaving a clear run from door to counter, where you’ll find the till at the left-hand end, along with a paper menu, the choice of coffee beans on the back wall. The espresso machine, a La Marzocco Strada, is at the far end of the counter, which stops short of the right-hand wall, leaving space for a small set of retail shelves.

The remaining seating runs in an L-shape along the front/right-hand side of Kafi. It consists of planters alternating with bench seats, which seat two at a pinch, although you’d need to know each other quite well. Made of old shipping pallets, they reminded me of the garden seating in Espresso Base. The seating starts, with a planter, immediately to the right of the door. There are two bench seats under the window and two more along the right-hand wall. In a neat touch, each bench has two cube-shaped wooden stools underneath which can be used for seating or as coffee tables.

The décor is interesting, the reclaimed scaffolding planks of the counter and table going well with the ceramic floor tiles and white-painted walls. As well as the greenery from the planters, there’s plenty of artwork, painted by either the owners (Yatish and Tripti) or by Ieva, one of the baristas. The reclaim/reuse philosophy extends to the milk, which is delivered in glass bottles which are then returned to the dairy.

Kafi alternates roasters between Workshop and a guest roaster, switching every four to six weeks. While I was there, the coffee was from Workshop, with Round Hill Roastery as the next guest. There was a washed Ugandan on espresso, although this will soon be replaced with the Haru espresso from the Yirgacheffe region of Ethiopia, which is only available in a handful of shops.

Since I rarely have Ugandan coffee (the last one I had in a coffee shop was in Chicago), I tried the espresso in a flat white, where it went really well with the milk. I was also taken with the handleless cylindrical cup, which comes from an east London pottery. I paired this with the vegan pasty, which had an excellent, moist pastry, stuffed full of slight-spiced vegetables. It was both tasty and filling.

Turning to filter, there was a Honduran single-origin from Francisco Alvarado on Aeropress, an Aricha Ethiopian single-origin on V60 and a Costa Rican on the syphon, which I decided to try, rarely seeing syphons in the UK. Served in a carafe with a small cup on the side, it was, as with all syphons, a little too hot at first. This is where the small cup came into its own, since it enables the coffee to quickly cool, allowing it to develop into a very smooth, full-bodied coffee.

Finally, the lovely baristas, Sam and Cecily, who looked after me royally all afternoon, gave me a sample of the nitro cold brew, made with an El Salvador single-origin from Climpson and Sons. It had a very thick body and that typical cold brew taste which I don’t mind, but it’s still not really my thing.

December 2019: I returned to deliver some Coffee Spot Calendars, and had a lovely Costa Rican espresso from The Gentlemen Baristas, a blueberry crumble slice and, as an added bonus, one of the Wellness Lattes, a rather lovely concoction of activated charcoal, peppercorn & vanilla, borage honey and oat milk. Normally this isn’t something I would order, so consider me very impressed!

You can also see what fellow coffee-blogger, Bex, of Double Skinny Macchiato, made of Kafi when she visited in May this year, shortly after it opened.