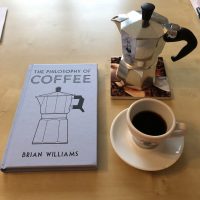 On Thursday, 25th January, something very special happened, both for the Coffee Spot and for me personally. That was the day that my book, The Philosophy of Coffee, which the British Library is publishing on next year. It has been a long time coming, almost exactly two years since Daniel of Cups of London Coffee had put my name forward to the British Library as a potential author.

So, what’s The Philosophy of Coffee all about? Well, to quote from the book itself, it’s a “short, entertaining and illuminating introduction to the history and culture of coffee, from the humble origins of the bean in northeast Africa over a millennium ago, to what it is today, a global phenomenon that is enjoyed around the world.”

It’s not a big book, just over 15,000 words, with 15 beautiful illustrations sourced from the British Library collection. It’s also, according to the blurb, “the perfect gift for coffee lovers”, so now that it’s out you should definitely buy a copy. Or two.

You can find out more about the book after the gallery.

If you want to know how I came to write The Philosophy of Coffee and why I took so long, I wrote a whole post about it before Christmas, so I won’t go over old ground. The book came out on Thursday, although there had been a few review copies out in the wild before then. Although it’s early days, the reception (so far, at least, has been very good). You don’t have to take my word for it either:    plenty of reviews have been published already, and not just by fellow bloggers:

If you prefer your reviews in video format, here’s some kind words from:

Finally, how’s this for a one-line review: “like a good espresso, short, sharp and with a great depth of flavour”? That’s from David Hughes over on Twitter.

I also wrote the following article about the culture of coffee, which draws heavily on the book and was published in the Sunday Herald:

For my friends in Australia, the good news is that Booktopia is now stocking The Philosophy of Coffee. If you are a non-UK stockist and you want a mention, just let me know.

The final option is to order a copy directly from me, which, as an added incentive, I will happily sign (unless you ask me not to). However, be aware that while I always dispatch orders as soon as I can, I am often away on long trips for work (although thanks to COVID-19, I’m not likely to be going anywhere any time soon) so there will sometimes be very long delays before I can dispatch orders.

Finally, I’m very happy to sign copies if you track me down in person, regardless of where you bought it from, so feel free to track me down at some point during the year (but don’t forget to bring the book with you!).

That’s it for now. Many thanks to Rob Reeves, Bean There At, Double Skinny Macchiato, Dr Jennifer Ferreira and London Lamppost for use of their pictures in this post.

February 2018: The Philosophy of Coffee is now available across the UK in Waterstones and is also available as an eBook.

August 2018: Exciting news! After just seven months, The Philosophy of Coffee has done so well that the British Library is reprinting it!

September 2018: Excellent news! The Philosophy of Coffee is launched in America, where it’s being distributed by Trafalgar Square Publishing. It is available on Amazon and through all good bookshops.

October 2018: For any of my new Japanese followers/readers, The Philosophy of Coffee is available in Japan on Amazon.

June 2022: The Philosophy of Coffee has a new cover. The design is the same, but instead of the pale blue colour scheme, it now sports a rather striking deep green.

49 thoughts on “The Philosophy of Coffee is Out!”