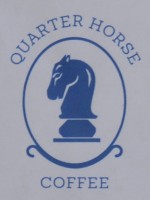 You can see what fellow coffee blogger, Bex of Double Skinny Macchiato fame, made of Quarter Horse when she visited in 2021.