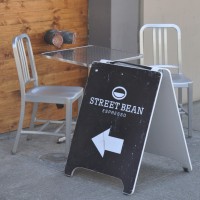 Street Bean’s a lovely, sunny spot with a simple, effective layout. It’s a rectangle, long side running along the street. Although north-facing, it’s still very bright inside since the street-side is almost entirely windows, providing plenty of illumination without the sunlight pouring directly in and blinding everyone. This sense of light and space is enhanced by the décor. The white-tiled, concrete-topped counter mirrors the white walls and ceiling, with their concrete floor. A splash of nature is provided by the wooden tables. One word of warning though: it can get quite loud.

The door’s on the far right, depositing you at the end of the counter, where bags of the various coffees on offer are displayed. After ordering here, move down past the two (espresso) grinders and espresso machine to the till, where you pay. As I observed with Milstead & Co., this is the way to do counter service, separating ordering from paying. Next to the till, at the left-hand end of the counter, is the pour-over station for the Kalita Wave filters, where you also wait for your coffee.

Street Bean uses the Nine Swans blend from local Elm Coffee Roasters as its house-espresso, with a guest (changing monthly) chosen from one of San Francisco’s Supersonic, Portland’s Heart and Vancouver’s 49th Parallel, giving it a clean sweep of the major west coast coffee cities. During my visit, the guest was 49th Parallel’s Guatemala Poaquil AA, but, after some conferring, the baristas agreed that the Nine Swans would suit me better.

This was an excellent choice. I enjoyed a lovely espresso, beautifully pulled and presented on a white china tray with a glass of soda water. It was quite fruity, especially on the final mouthful, but it was also very smooth and drinkable.

I was so impressed that I went back for some filter coffee. Street Bean brews iced coffee using the Chemex and there’s also bulk-brew, with its own dedicated single-origin, plus two more single-origins on the Kalita Wave. While I was there, there was something of an Ethiopian theme going on, with different Ethiopian offerings from Elm on bulk-brew and from Elm and Supersonic on the Kalita Wave. Having spurned Supersonic on espresso, I had its Kilenso, which made a very smooth and enjoyable drink that held up even when cold.

Before leaving, I chatted with Merri, Street Bean’s programme director, who told me about the roastery plans. Once the on-site roaster is up and running, the plan is to expand to a dedicated off-site roastery with a 5kg roaster. However, Street Bean intends to remain a multi-roaster café, with its own beans joining the cast as a regular fixture.

December 2015: Street Bean was a runner-up for the Coffee Spot Special Award for 2015.

If you are interested in this sort of social enterprise, then you might like to know that Second Shot is currently fund-raising to open a similar coffee shop in London. Please consider supporting this project if you can.

Finally, a big shout-out to Arturo, a photographer who I met at Street Bean and who gave me a long, long list of Seattle coffee places I should visit.