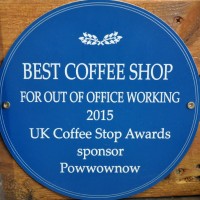 200 Degrees isn’t really in the Flying Horse Walk Arcade, instead occupying the far (right-hand) end of the magnificent Old Flying Horse Inn, to the right of the Gallery’s northern exit. Facing onto Cheapside and opposite the majestic Exchange Buildings, it’s a glorious setting, which dates back to 1483, a fantastic, historic setting for a very modern coffee shop.

Not quite a basement, 200 Degrees’ layout’s fairly simple. The front door opens onto the right-hand end of a street-level platform, four two-person tables against the left-hand wall. Two small flights of steps, one directly ahead, one to your right, lead down to the coffee shop floor, where 200 Degrees stretches out ahead of you.

The counter dominates the right-hand wall, the steps depositing you in front of the cake and sandwiches. Next is the till, then grinders and espresso machine. Beyond that, stairs lead up to toilets (back) and 200 Degrees’ barista school (front). The rest of the considerable space consists of seating, which is in three rows. On the right, there’s a bar alongside the stairs, while in the centre, between pillars holding up the ceiling, there are tables of various shapes and sizes. Against the left-hand wall, there’s a large table, then a little nook with a typewriter and telephone. Next comes a fireplace with a gloriously fake fire, then more tables. Finally, along the back wall, there’s a padded bench lined by two-person tables and, tucked away behind the stairs, by a solitary window, a final two-person table.

My only slight complaint is that it’s a loud space, particularly at the back, where the music seems to be played at a particularly high volume. Mind you, I probably didn’t help myself by sitting directly under a speaker…

200 Degrees offers an extensive espresso-based menu, including a cortado, which I find is the perfect balance between coffee and milk. Using the house-blend, Brazilian Love Affair, it was a slightly old-school espresso, darker and less sweet than many, which goes well in milk, the flavour coming strongly through and the milk’s sweetness more than compensating for the lack of sweetness in the coffee.

I paired this with a doughnut, and what a doughnut! Oval rather than round in shaped, baked rather than deep-fried, it was awesome, a rich, chewy dough, topped by a sweet, but not sickly sweet, iced glazing. Fortunately I only ordered one, otherwise I might have eaten two or three. Or four.

I followed this with the guest espresso, which, along with the single-origin filters, changes roughly once a month. During August, it’s the Roast House Mix, on the other end of the spectrum from the house-blend. Really fruity, it’s a bit like being punched in the mouth, although the second mouthful of the commendably short shot was less dramatic. Or maybe I was expecting it by then. Either way, it wasn’t unpleasant, just very intense and, given everything, surprisingly smooth and well-rounded.

To soak up the caffeine and sugar, I had a half baguette packed full of pickle and roasted vegetables, just what I needed!

I returned the following morning to take some more pictures, and tried the guest espresso as a cortado, correctly reasoning that I’d prefer it in milk. It was lovely, a really sweet, well-balanced drink that retained the original fruitiness of the straight espresso.

You can see what local coffee bloggers, Notts Coffee, made of the 200 Degrees Coffee Shop.