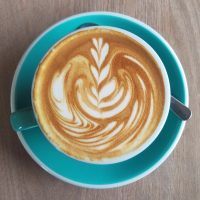 Stockbridge, between Winchester and Salisbury on the A30, is, in many ways, a stereotypical English country town. The long, broad, straight High Street which runs through the centre of town is lined with quaint cottages, independent shops, country pubs and old-fashioned tea rooms. And a speciality coffee shop. Well, maybe not that stereotypical after all.

Coffee Lab is the rapidly-growing mini-chain, spreading out from its home in Winchester through Hampshire (as far east as Chichester) and Wiltshire (as far west as Gloucester), with a Midlands outpost to the north in Leamington Spa (opening soon). Meanwhile its march southwards has only been stopped by the sea. The Stockbridge branch is towards the Salisbury end of the High Street, above a pizza restaurant with excellent views up and down the High Street.

The coffee, as ever, is from The Roasting Party, with two blends on espresso, the house-blend (Create) and a second (Thrive). If you want filter coffee, there is a choice of two single-origins (a Kenyan Peaberry or a Brazilian during my visit) through V60 or Aeropress, while there’s also loose-leaf tea. If you’re hungry, the Coffee Lab has limited selection of four sandwiches and small selection of cake.

October 2020: the Coffee Lab is down to just three locations, this one and two more in Winchester, while the coffee is now roasted by DT Coffee, set up by Dhan Tamang, one of Coffee Lab’s founders.

Finding the Stockbridge branch of Coffee Lab, which is celebrating its first birthday this month, was pure serendipity. Driving to Salisbury to visit the Coffee Lab there, I saw it as I passed through Stockbridge along the A30. I immediately found somewhere to park and headed over, although it took me ages to work out how to get in!

Coffee Lab is on the top floor of a long, thin two-storey building which runs back from the High Street. There’s an open courtyard bounded by the building on the left and by a small stream on the right, one of many that cut through the town running north to south. Although Coffee Lab, with its prominent balcony overlooking the courtyard, is easy to spot, I struggled to find the entrance.

It’s actually in the far corner of the courtyard, which I took to be the entrance to the pizza restaurant. I wandered around in vain looking for another door before someone took pity on me and came out to ask if I needed any help. As soon as the door was opened, everything became blindingly obvious…

Ignore the pizza restaurant to the left and look dead ahead, where you’ll find the Coffee Lab clearly signposted. Just follow the signs upstairs, where you find yourself on a broad landing, with Coffee Lab off to the right. Meanwhile, the double doors straight ahead lead to long, thin balcony, which runs the full length of the building’s left-hand side, overlooking the courtyard and with some excellent views along the High Street. There are a couple of benches at the near end, while at the far end, furthest away from the door, are two bench seats with built-in tables.

While very pleasant, the balcony was extremely cold when I was there, so I headed inside into the Coffee Lab proper. This occupies a large, long space, separated into front and back rooms by a wooden dividing wall, with a door on the left and a large opening on the right, which helps make it feel like one space.

The front part has the counter, tucked away on the right, and two thin, four-person high tables with stools on the left, flanking the window. The bulk of the seating is on the second (back) part, with windows offering views up (left-hand wall) and down (back wall) the High Street (although up and down are arbitrary). The seating is arranged around the edges, with a variety of tables, ranging from semi-circular ones under the two windows to a six-person communal table against the right-hand wall. It’s really beautiful inside, particularly in the back room with its wooden floorboards and whitewashed walls and ceiling.

Coffee Lab gets all its coffee from The Roasting Party, with two bespoke blends. The first, which acts as the house blend, is known as Create, but used to go by the name of Einstein, while the second is called Thrive (was Heisenberg). I had a lovely, smooth flat white made using the Create blend. As is expected, since the Coffee Lab’s head barista is six-times UK Latte Art champion, Dhan Tamang, the latte art in my flat white was awesome. I paired this with a toasted mozzarella, sundried tomato and pesto sandwich on crusty ciabatta bread, which was just bursting with flavour.