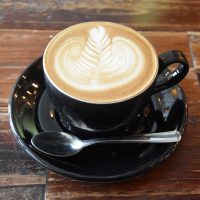 Java Lounge is a name with history when it comes to coffee in Birmingham, first opening in Moseley Village in 2005. For a long time, it was just a local institution, but in 2015, the second Java Lounge opened, right in the heart of the city on Colmore Row. Now there are four branches and a rebrand in the offing (with a name change to Java Roastery to reflect its new focus). I first became aware of Java Lounge when I met with Akram, the owner, at last year’s Birmingham Coffee Festival, catching up with Akram and the team at this year’s festival. It was, I thought, high time I paid Java Lounge a visit.

The Colmore Row branch occupies a beautiful, high-ceilinged space with a main room at the front with more seating in a smaller room at the back. Alternatively, you can sit outside where there’s a small row of tables on the relatively quiet street. The coffee is all roasted in-house with a pair of seasonal espresso blends and a single-origin on pour-over through the V60 (for one) and Chemex (for two). If you’re hungry, there are breakfast and lunch menus, plus a selection of sandwiches and cakes.

Java Lounge occupies a beautiful old building at the western end of Colmore Row, opposite where Jake’s Coffee Box once stood. Three small, round tables stand on the pavement to the left, while on the right, an arched entrance has two stone steps leading up past a pair of gorgeous metal doors into the large, almost cube-shaped interior (a ramp is available on request).

This is one coffee shop where looking up is rewarded. There are four aches high up on the left- and right-hand walls, plus two rows of five narrow, tall windows at the front. Dark wooden floorboards, counter and furniture, coupled with sumptuous sofas benches, add to a relaxed, upmarket atmosphere, a million miles from the stereotypical hipster hangout with its chipboard and unpainted walls. While there’s plenty of natural light, an awesome lighting rig hangs from ceiling, with nine huge, conical metal lamps and four shallower ones over the counter. There’s an even better lighting rig hanging from the ceiling in the alcove to the rear.

The main room, at the front, houses the counter and much of the seating. Three booth-like structures run the full width of the Java Lounge in the windows left of the door. These have high tables and back-to-back padded sofa benches, all slightly raised above ground level. Beyond this, the counter occupies the left-hand side, a busy affair with cakes and till to the front, espresso machine and grinders at the back.

There’s a smaller set of three booth-like structures in the middle, backs to the counter, creating a corridor-like space where you can order. These are two-person affairs, the front and back booths having seats facing each other over a single table, while the middle one is slightly thinner and, as a result, is a single-seater, its back to the counter. Finally, a long, padded bench runs the length of the right-hand wall under a lovely mural explaining the origins of coffee (effectively a condensed version of the story I tell in my book, The Philosophy of Coffee). This has five square, two-person tables, each with a chair on the opposite side.

A wide, low opening on the right in the back wall leads to a smaller, seating area about half the width of the front. Padded bench seats run along both walls, each with five long, thin two-person tables, while at the back a shallow, curved alcove has room for four people at a single table.

In terms of what it offers, Java Lounge is a halfway house. While there’s speciality coffee, there are many drinks of the sort you’d expect in a high street chain, including milkshakes and plenty of syrups, which is not necessarily a bad thing. There are two seasonal house espresso blends, Rilio and Siena, plus a single-origin pour-over.

I actually visited twice, once in 2018, when I didn’t have time to get any photographs, and again last week, when I did. On my first visit, I went for a pour-over, trying the Honduran single-origin through the V60, a rich, full-bodied coffee which mellowed as it cooled, developing a real sweetness along the way. I paired this with an excellent raspberry Bakewell slice, with a solid (in a good way) base of cake, a hint of almond flavour and lots of raspberry jam.

On my return, I ordered a flat white. I didn’t specify the blend, but I’m guessing from the rich, dark taste that it was the Rilio, rather than the Siena, which was described as fruity and sweet. Either way, it went down very well as my first coffee of the day.

You can also see what I made of the original Java Roastery in Moseley Village when I visited in August 2021.