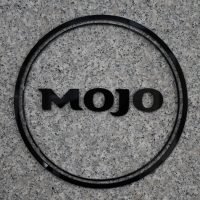 On South Wacker Drive in The Loop, Mojo’s in a prime location, just across the river from Chicago’s Union Station. Occupying part of the ground floor of a large office block, it’s accessible both from the lobby (corner of Wacker and West Adams) and directly from South Wacker Drive (at the far left-hand end). A sheltered terrace runs along the front of Mojo, facing Wacker Drive, protected from the elements by the overhanging upper floors of the office building. You’ll find the second door at the far end, along with a handful of tables if you can stand the traffic on the busy Wacker Drive (although it’s well set back from the road). The front, by the way, is all glass, plus there are windows down the left-hand side, making for a very bright space.

Two sets of rotating doors at the right-hand end (on the corner of Wacker/West Adams) bring you into the lobby, where you turn left to reach Mojo, which stretches out ahead of you. You’ll need to walk the length of Mojo, which is long and thin, to reach the counter, which is at the far left-hand end. Alternatively, entering directly from Wacker Drive, you arrive at the counter, which is against the back wall, occupying maybe half the length of Mojo. Facing you is the food section, with the brunch menu on the wall and various goodies, both sweet and savoury, to tempt you. Off to the right, past the till, is the coffee-side of the operation, with the aforementioned pair of Steampunk brewers and Synesso espresso machine.

The seating is around the edges. To the left of the door is a potentially awkward L-shaped space, delineated by a square pillar which, presumably, stops the ceiling from falling down. Mojo has cleverly filled this with a window-bar which starts opposite the counter, runs along the left-hand wall, then a short way along the front window, before ending with a narrow section between the door and pillar. There’s more seating to the right of the door, with long, padded C-shaped couches running in bays along the windows at the front, separated by broad, floor-to-ceiling concrete pillars. The first bay, immediately next to the door, has three two-person tables, while there are two more, each with five tables.

There’s more seating beyond the end of the counter against the back wall. Opposite the final window bay are three long, high four-person tables project from the wall, each with a round, four-person table at the end, so they look a little like exclamation marks. For good measure, there are two more of these round tables next to the pillars at the front, flanking the final seating bay.

Although it was a coincidence, all the staff were Kiwis during my visit, making Mojo a welcome slice of New Zealand in the heart downtown Chicago. Since I was there for lunch, I played it safe with the Kiwi classic of smashed avocado and feta on toast, which was excellent. Logic suggested that I should have paired it with a flat white, but, feeling perverse, I had a lovely piccolo instead. Served in an espresso cup, the coffee and milk were in perfect harmony, the house-blend’s fruity nature coming through.

I followed this with a Ugandan single-origin filter from the Steampunk brewer. A lovely, subtle, fruity coffee, served in a carafe with a cup on the side, all presented on a little tray, it really matured as it cooled, proving to be as good cold as it was hot. This was paired with a chocolate loaf cake, a delightfully light sponge with a rich chocolate topping.