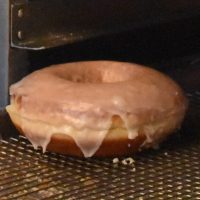 This is the original Doughnut Vault that my friend Phillip recommended to Amanda and me as the source of the best doughnuts in Chicago. A small (almost) hole-in-the-wall operation in River North around the corner from my hotel, we visited during our “polar vortex” trip to Chicago. Although there is batch-brew filter coffee here for $1 a pop (takeaway only, so don’t forget to bring your own cup) we came specifically for the doughnuts, so can’t comment on the quality of the coffee.

Just like the bigger, coffee shop version of the Doughnut Vault on Canal Street, the doughnuts sell out quickly. However, unlike the Canal Vault, where the coffee shop has set hours and stays open selling coffee long after the doughnuts are gone, once the Franklin Vault sells the last doughnut, it closes. The good news, however, is that, unlike the Canal Vault, it opens at weekends, with a more civilised start time of 09:30, which is how Amanda and I managed to get up in time for the last of the doughnuts!

The Doughnut Vault is on Franklin Street, in Chicago’s River North district, just behind the Merchandising Mart. It’s also a five minute walk from my hotel, a definite advantage since, when Amanda and I visited, it was a bracing -15°C outside (although even that was warm compared to the -30°C we experienced later in the week during the polar vortex).

There really is very little to the Doughnut Vault, just a door in the wall on the right-hand side of the street as you walk north along Franklin Street. Indeed, if it weren’t for the large menu painted on the wall to the left of the door, you could easily miss it.

During the winter, there’s a temporary (I think) second door built out onto the pavement to help keep the heat in, providing an airlock like entrance to the actual building. Once inside, it really is tiny, a corridor-like space extending left (to the counter) and right (a small, standing-only space where you can consume your doughnuts if you like). The décor is, however, beautiful, with glazed tiles on the back wall and exposed brick everywhere else.

A mirror on the back wall doubles as the menu, replicating what’s painted on the wall outside, while the counter at the end gives just enough room for you to order. This too is lovely, with a shallow brick arch above and, behind the counter, another mirror. The only window is here too, in the front wall, while a glorious chandelier (a smaller version of the one hanging in the Canal Vault) hangs from the ceiling. The front of the counter has space for the modern, iPad till, with a glorious old cash register to the right. At the back, in a hole in the back wall, are the doughnuts (the Doughnut Vault gets extra points for spelling doughnut correctly in the land of the “donut”). The server will simply pull out the shelves to show you what’s on offer. Pick what you want and that’s that!

The Doughnut Vault describes its products as old fashioned doughnuts which are made, fresh each day, in the kitchen in the basement below the shop. There’s a small range of flavours which are supplemented by a daily special. If you are worried about them selling out before you get there, check out twitter, where the Doughnut Vault conveniently tweets when each of the two vaults (#FrankinVault or #CanalVault) has sold out for the day.

Amanda and I had a box of six doughnuts to go, which pretty much cleaned them out at 11am on a (very cold) Sunday morning. I can’t tell you much about them except that they were delicious, fully justifying Phillip’s recommendation!