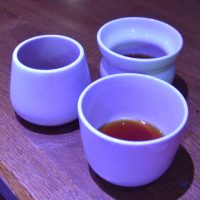 Welcome to the third and final detailed write-up of the 2019 London Coffee Festival, which took place last month at the Old Truman Brewery. Along with my overall Festival Round-up, so far I’ve written about the coffee and the coffee kit. Today’s the turn of one of my festival highlights, my coffee experiences.

But what do I mean by “coffee experiences”? These are the events that go around the coffee itself, such as coffee cuppings, roasting demos and coffee/food pairings. They’ve been very popular over recent years, with the festival running practical, skills-based events such as Latte Art Live and Home Barista Workshops. There have also been experiences such as The Tasting Room (with subjects ranging from tea to Vermouth) and The Flavour Discovery, a multi-sensory journey from Union Hand-roasted!

As in previous years, most of these events were pre-ticketed, with limited numbers at each event. As a result, I only attended one, the annual La Cimbali Sensory Series, which I only managed to attend thanks to a kind invitation from La Cimbali! Hosted by the fabulous Rob Ward, he manages, year after year, to invent with some new way to challenge the senses and educate at the same time.

You can see what Rob came up with this year after the gallery.

So it was that one Friday afternoon, I gathered in a darkened room at the La Cimbali stand (I’ll explain why it was darkened later on) with a handful of other fortunate folks to be entertained and educated by the maestro, Rob Ward. In previous years, these sensory sessions took place on the stand itself, but that always proved a noisy environment, so last year, they were moved into their own little room, which is a vast improvement.

Cocooned away from the rest of the festival in our little world, we were totally immersed in what Rob had to say, which started with handing around a pair of wine glasses with weird-shaped stems (if you haven’t, take a look at the gallery above, where you’ll see a couple of shots of them). He filled these with water (Volvic) and invited us to take a sip or two with the handle in various positions: facing you, away from you or side-on. This changes the way the water hits the mouth which in turn changes the way we taste it. Even with something as simple as (and, in common perception, as tasteless as) water, the change is noticeable.

This has been known about in the wine (and other drinks) business for a long time, which is why certain drinks are served in glasses of a specific shape. In contrast, the coffee industry has been rather slow in catching on, although it’s sometimes been implicit when you look at cup design, with espresso being served in one shape of cup, cappuccinos and flat whites in another (a long, long time ago, a friend gave me a pair of cylindrical espresso cups as a gift and I never did like them; now I know why). However, coffee, in general, has a long way to go in fully understanding the role that cups play in the perception of taste.

Rob went on to explain why the shape of the cup has an impact, showing us a diagram of the human tongue. Taste, you see, isn’t something you experience equally across the tongue (or around the mouth for that matter, which is why you’ll read, for example, some of my descriptions of coffee as having a front-of-the-mouth taste). Rob explained that we taste sweetness, for example, right at the tip of our tongues, while we taste bitter things right at the back. Meanwhile, we taste sour things at the sides (although there is long-standing evidence that this is an over-simplified picture – thanks to Bean Thinking for the heads up on this one).

Naturally, if you change the shape of a glass, which changes where the liquid hits your tongue, it’s going to change how you taste it. All of this, by the way, was just an introduction to Rob’s main topic, which you can read about after the gallery.

Rob began by introducing three coffees, which formed this year’s Barbarella espresso blend: a washed Guatemalan (50%), a washed Rwandan (30%) and a natural Ethiopian (20%). We used the last of these, the Ethiopian, which was brewed as a filter, for our sensory session. We were each given a scoring sheet and asked to rate various aspects of the coffee on a scale of zero to six.

We had the same coffee served in three different cups: open, tulip and split, comparing how the different cups affected the various aspects (aroma, acidity, sweetness, bitterness, body and balance). I found that the changes were quite subtle, but I suffered a little because the coffee was rather hot. I find that I tend to be more sensitive to heat than most, and feared that most of the time, I was perceiving the heat rather than the underlying taste of the coffee.

Rob then had us vote on our favourite cup and, rather perversely, we voted by a narrow majority for the open cup. I say perversely because the split cup is supposed to enhance the flavour of bright, acidic coffees such as the Ethiopian we were tasting. However, that’s the joy of taste and perception: it’s a very individual experience, with no right or wrong.

I was part of the majority, by the way, voting for the open cup. However, as I said, I had a feeling that the coffee’s temperature was masking my ability to taste the underlying flavour, so, sneakily, I kept hold of my three cups. This meant that I could try all three again when the coffee had cooled.

Although I didn’t redo my scores, I definitely preferred the split cup the second time around, but by then the votes had been counted. Decision taken, we were onto the third and final stage of our journey which you can read about after the gallery.

Using the open cup, Rob had us perform one more experiment. Up until now, we’d been assessing the impact of the shape of the different cups on our perception of the coffee’s taste. However, Rob had one final trick up his sleeve. I said at the start of the piece that we were tucked away in a darkened room and now all became clear. We were each handed a cup of the Ethiopian coffee and Rob used a filter on the lights to make the light red, followed by green and then blue.

The idea was that we would taste the coffee under each light and see if it was any different. Here I was struck by the heat problem again and, honestly, I couldn’t tell any difference under the lights. However, judging by the comments from the other participants, they noticed plenty of difference and, by a margin of four to one (I abstained), they voted green as their favourite light, which is supposed to enhance the perception of acidity (which makes sense). If you’re interested, red enhances perception of sweetness and blue reduces perception of aroma.

Finally, as a reward for being lab rats, we were given a shot of the Barbarella espresso blend in a whiskey nosing glass. It was rather lovely, with an intense aroma, enhanced, I felt by the shape of the glass.

So, what does all this tell us? Firstly, it’s that taste, or rather the perception of taste, is a damn sight more complicated than most of us give it credit for. It also raises questions for coffee shops: should they serve different coffees in different-shaped cups to enhance a specific coffee’s flavour?

I’ll be honest: for the average coffee shop, I don’t see this happening, largely because there are so many other factors at play (not least customers putting things like sugar in their coffee!). There’s also a cost factor involved. Most of the speciality cups don’t come cheap and this means carrying a much larger stock. However, for those who are trying to provide a coffee experience rather than just a cup of coffee, I can see it being a thing. Rob also told me that some coffee shops were already looking at changing their décor to see if it had an impact.

In closing, I have experienced this in the wild, so to speak. During my Midwest road trip last year, I visited Discourse Coffee, a rather unique coffee shop in Door County, described by owner Ryan as a “liquid workshop”. I was served a washed Ethiopian Sidamo espresso in an hourglass shaped cup which was a touch too acidic for my tastes. Ryan then put the same espresso into a cylindrical cup which accentuated the sweetness, much to my liking. Had I not known better, I’d have sworn that they were different coffees: now I know why!

I also discovered that Maruyama Single Origin in Aoyama, Tokyo, offers an espresso set, where the same espresso is served in two different-shaped cups. I was so impressed, that I wrote a whole article on it!

For another perspective on the whole Festival, check out the review by Bex. Meanwhile, for a different take on the La Cimbali Sensory sessions, see this by Catering Today.

If you’ve published a review of the festival, drop me a line with the link and I’ll add it in.