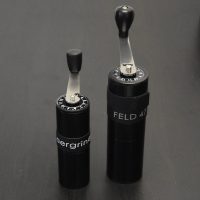 Welcome to the second of three detailed write-ups of the 2019 London Coffee Festival, which took place three weeks ago at the Old Truman Brewery. Last week I wrote about the coffee, while this week my focus turns to the kit, those various bits and pieces of coffee-related equipment which you always find at the London Coffee Festival. You can find details about the festival itself in my Festival Round-up, published two weeks ago, while the third and final write-up covers my coffee experiences.

The London Coffee Festival has always seen more than its fair share of coffee-related equipment, with many manufacturers choosing to launch their latest products at the festival. This includes a lot of professional equipment, including the latest espresso machines, which, although interesting, are, sadly out of my price range. I’d also need a bigger kitchen!

Since I had limited time this year, only attending for two days, I focused on the home user, further narrowing my focus to some familiar names who were launching new versions of their products, along with some interesting new products from a company I’d not heard of before. This covered a wide range, from the simplicity of a manual grinder all the way up to an (almost fully) automated espresso machine.

We’ll start with a visit to old friends of the Coffee Spot, Knock, producers of some of the  world’s finest hand grinders. I first came across Knock, and its founder, Peter Kilpatrick, exactly five years ago at that year’s London Coffee Festival. Back then, Knock was producing the hausgrind, a hand grinder based around a set of 38mm steel burrs, housed in an eye-catching wooden cylinder. Since then the range has expanded first to include the feldgrind, a smaller home/travel version, and the aergrind¸ an even smaller version designed to fit inside an Aeropress, with all three grinders using the same 38mm steel burrs.

Regular readers will know that I have been a Knock convert since 2015, when I bought Woody, the first ever wooden feldgrind. In fact, I now own three Knock grinders, an aluminium feldgrind and an aergrind (both gifts from Knock) joining Woody. These days, Woody stays at home, my feldgrind is at my Dad’s and my aergind travels everywhere with me, forming an integral part of my travelling coffee kit.

As the years have gone by, Knock has streamlined its range. These days, the feldgrind has been replaced by the Feld2. There have been several improvements, including an all-in-one upper cylinder/burr set pioneered by the aergrind. In the original feldgrind, they were separate items, which could, very occasionally, come apart, so the new grinder will be even more reliable.

There’s also a new all-in-one lid/handle combination, compared to the feldgrind’s separate handle and lid. The all-in-one design leads to improved grinding efficiency and means that there’ll be no more instances of the handle flying off the top of the grinder during particularly vigorous grinding! The trade-off is that the new design doesn’t pack down so easily, but with the addition of the aergrind, Knock found that people were increasingly using the feldgrind at home rather than as a travel grinder (which is exactly what happened to me), prompting the redesign.

The aergind, which was on display at the festival, has also had a makeover, with the old plastic lid (with its black-on-black numbers) being replaced by a new metal lid with bold white-on-black numbers, making for much easier adjustment. If you have one of the old lids, you can purchase a replacement from the Knock website.

However, the most exciting news is the launch of the new Feld47. This chunky bit of kit brings all best of Knock’s grinders and design, but with a new, bigger 47mm steel burr set. Unsurprisingly, the bigger burrs result in faster grinding, with the same excellent grind consistency. Even better, for those who like to make Turkish coffee at home, you can grind even finer with the Feld47. I had a play with the new grinder and can confirm that grinding with it is a dream.

The Feld47 comes in two finishes, the Feld47 Honed, with an all-in-one lid/handle and a bigger crank arm for even more efficient grinding, and the Feld47 Travel, for when an aergrind just won’t cut it. The travel version has a slightly smaller crank arm and a two-piece lid/handle for ease of packing. If I didn’t already have three Knock grinders, I would be seriously considering a pair of Feld47s, honed for home use and travel for on the road.

You can read about another new additional to the Knock stable after the gallery.

This year’s festival was the first time I came across Knock’s aerdisc, a reusable metal Aeropress disk. For roughly the same price as a packet of 350 disposable paper filters, you can have a single metal filter and never need worry about running out of filter papers again (instead you can worry about losing your metal disk, but that’s another story).

Peter let me have one, which I’ve been using on my current travels around the USA. My general feeling is that I rather like it, although using a metal filter does have its pros and cons, which are rather neatly explained in this article from Bean Ground. In summary, using a metal disk (there are plenty on the market, Bean Ground used the Able Disk Standard for its comparison) tends to give you more body in your coffee, but leaves more coffee sediment in your cup. The metal filter also requires cleaning, whereas a paper filter can just be expelled at the end of the brew along with the ground coffee.

I can certainly attest to the last two points. I’ve definitely been noticing more residue in my coffee cup after using the metal disk and the clean up after each brew is a little bit longer. Plunging is also considerably easier, with the metal disk giving less resistance. However, I’ve not really noticed any difference in taste in the resulting brew, although people with more discerning palates than mine might notice something.

In conclusion, I think this is always going to be down to personal taste. The pros (no waste) versus the cons (the main one, for me, being the extra clean-up required) are fairly well-balanced.

You can see what else I got up to, coffee-kit wise, at this year’s festival after the gallery.

At the other end of the scale from manual hand grinders is the Sage range of home espresso machines. Regular readers will know that I have a Sage Barista Express, the mid-range model with a built-in grinder. This year, Sage has launched the Sage Barista Pro, effectively an upgrade on the Express, although both machines are currently available to buy, so it’s not a replacement.

Visually, both look similar, with the grinder on the left and the group head on the right, although the new Pro is slightly bigger, perhaps 10% wider and 10% deeper. It also has more rounded edges and, in the most obvious visual change, the Barista Express’s central pressure gauge and indicator lights have been replaced with a single, large LCD screen on the Barista Pro.

I have mixed feelings about this, since I’ve really become used to the pressure gauge on my Barista Express, using it as a vital tool to judge my espresso shots. However, the new screen offers far more information and makes using the Barista Pro much easier. For example, there’s a new set-up screen which makes adjusting things like the shot temperature (which on the Barista Express involved a fiddly combination of button presses) a piece of cake.

You also get more information during the grinding and extraction, with the LCD screen showing your progress. During grinding, a timer counts down how long’s left, while during a shot, the same handy timer counts up the seconds since the start of the shot. The screen also shows you when the pump switches from the lower pressure pre-infusion stage to the main extraction, partially making up for the missing pressure gauge.

Another change is the grinder adjustment, where the thumb-wheel on the side of the Express has been replaced by a large knob on the Pro. I didn’t have long to play with the machine at the festival, but my first impression was that this is easier to use. On my Express, I always found the thumb-wheel awkward, while the setting (shown by a number on the thumb-wheel) could be hard to read, particularly in low light. In contrast, the LCD screen on the Pro gives you a clear view of the current setting.

There has also been a big change under the bonnet of the Barista Pro, where a new heating system means that it’s ready to go three seconds after you switch it on. This compares to around 40 seconds for the Barista Express, which sounds impressive. However, given everything else that I do around making my coffee (which includes weighing out my beans) I don’t notice those extra 40 seconds, so it’s not a deal-breaker for me.

The fast heat-up also means that the Barista Pro switches from espresso extraction to steam production almost immediately, which, for me is a bigger deal, although, since I used the switch-over time on the Barista Express (again about 40 seconds) to get the milk from the fridge and pour it into the jug, it’s not such a deal breaker either.

The verdict? I didn’t have long to play with the Barista Pro at the festival, maybe about 20 minutes, but overall, I was very impressed. It’s a great addition to the range, coming in, price-wise, a little more expensive than the Barista Express. Would I recommend it over the Express though? Well, if it was the same price, I’d say yes, unreservedly. As it is, it really depends on how much you value the additional features.

On the basis of the quick play I had at the festival, I can’t really say. There is a rumour that Sage will provide me with a Barista Pro over the summer, in which case I can have an in-depth look at it. If it happens, I will be sure to let you know!

See what I made of my coffee experiences and the La Cimabli Sensory Session in the next of my detailed write-ups. In the meantime, for another perspective on the Festival, check out the review by Bex. If you’ve published a review of the festival, drop me a line with the link and I’ll add it in.