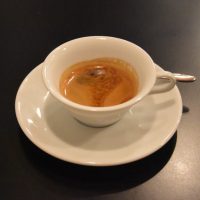 Earlier this week, I wrote about the Maruyama Single Origin store in Aoyama, one of my favourite after-work haunts when I’m working in Tokyo (although I since learnt that it has closed). It’s a lovely coffee shop in its own right, offering the sort of high-end service that I’ve come to expect from visits to other Maruyama locations, such as Nishi Azabu and Nagano Station. However, the single origin store goes one step further, with the focus even more firmly on the coffee.

As well as only serving single-origins (a typical Maruyama will have seven different blends), there are delights such as an espresso and cappuccino set (effectively a split shot or one-and-one) and, a new one on me, the same espresso served in two different cups. About the only thing that Maruyama Single Origin doesn’t offer is a filter tasting flight, but since there are always four or five samples for you try on the downstairs counter, it’s almost the same thing.

Naturally, I had to indulge, and, over the span of several visits, I put these various coffee experiences through their paces. Rather than try to cram them all into my write-up of Maruyama Single Origin, I decided to dedicate this Saturday Supplement to my experiences.

Let’s start with the espresso and cappuccino set, a new name for a relatively established concept, where the same coffee is served black (espresso) and in milk (cappuccino) so you can see how the addition of milk affects the flavour of the coffee. I had an espresso and cappuccino set on my most recent visit, made with a washed single-origin from the La Maravilla farm in Cangual, western Honduras. Maria Santos, the single mother who runs La Maravilla, was Maruyama’s featured farmer on the September newssheet, which prompted me to try the coffee.

My espresso arrived first, served in a wide-brimmed demitasse cup used by three-time Japanese barista champion, Miki Suzuki, in her 2017 World Barista Championship routine, where she finished second. Shortly afterwards, the cappuccino arrived in a classic tulip cup. On its own, it was an excellent, sweet espresso, with a hint of acidity and a front-of-the-mouth feel. In milk, the sweetness of the milk and coffee combined well, my only (minor) quibble being that, as a single shot, it was a little lost in the milk.

I was more intrigued by the espresso offering, Maruyama serving two single-shots of the same coffee in different cups, a classic tulip-shaped cup and the aforementioned wide-rimmed Miki Suzuki cup. This allows you to explore the impact of the cup’s shape on your perception of the coffee’s taste. I found this fascinating, having attended an event on precisely that subject at this year’s London Coffee Festival. The two cups are prepared and served separately, with the tulip-shaped cup served first. This means that one doesn’t get cold while you are drinking the other, although the downside is that you can’t taste them side-by-side.

I tried the espresso set on my first visit at the end of last year and again on my return this year, on both occasions being served the daily single-origin. This comes with its own little information card, with tasting notes in English and Japanese, while there’s more information in the monthly newssheet.

On my first visit, I had a red-honey processed single-origin from Jaime Cardenas’ Villasarchi farm in Costa Rica. It the tulip cup, it was bright and fruity, with some acidity. In contrast, the wide-brimmed cup really accentuated the coffee’s acidity and brightness. Of the two, I preferred the tulip cup, but was delighted by how the cups’ shapes influenced the taste. Although I could tell that they were the same coffee, they had quite different characteristics.

On my return this year, the espresso was from a farm called Los Nogales in Colombia, owned by Óscar Hernández. In the tulip cup, it was a really bright, acidic coffee, while in the wide-brimmed cup, it had the same acidity, but was less bright, with a more of a front-of-the-mouth feel. Once again, it was recognisably the same coffee, but with markedly different taste profiles.

I also had some more common place coffee experiences, such as a Guatemalan geisha from a visit in 2018, which the barista recommended having through the syphon (he felt this would accentuate the flavour compared to the cafetiere, which would give it more body). The result was a lovely, smooth, delicate cup, which I paired with an awesome slice of toast. Doorstep thick, it was crunchy on the outside, but light in the middle, served with butter and some excellent apricot jam.

Finally, I had a takeaway coffee in my HuskeeCup last week, but that’s for another story.