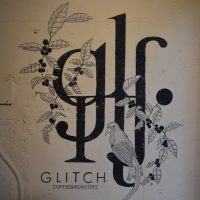 If you take a look at my coffee map of Tokyo, you’ll see that it’s strongly focused on Shibuya, Omotesandō and Aoyama, where I’ve spent most of my time, usually for work. Today’s Coffee Spot, Glitch Coffee & Roasters, is, in that sense, unusual. A well-established roastery/coffee shop, it’s located in Jimbōchō, just to the north of the Imperial Palace gardens, with a recently-opened second location, Glitch Coffee Brewed, in the Nine Hours capsule hotel in Akasaka.

Like many of Tokyo’s speciality coffee shop/roasters, Glitch Coffee & Roasters is a pretty small affair, with the roaster, a 5kg Probat, in the actual coffee shop on the right-hand side, in full view of the customers. Although a pair of single-origins are available on espresso, the focus is firmly on pour-over, where a further selection of single-origins (typically five or six) are available through the V60. All the beans are, naturally, available in retail bags, with Glitch specialising in light roasts.

You can read more of my thoughts after the gallery, where the photos are from my 2018 visit unless otherwise stated.

I learnt of Glitch Coffee & Roasters from a tip-off from Adam Williams, but it was my visit to Lattest during my visit to Tokyo as part of my around the world trip at the end of last year that prompted me to go. Lattest’s manager, Yumi, told me that she roasted Lattest’s coffee on the roaster in Glitch, which piqued my interest (although Lattest now has its own dedicated roastery).

Glitch is on Chiyoda-dori, a main north-south route through Jimbōchō. Standing on a corner on the east side of the street, it’s on the ground floor, occupying a fairly small space, twice as long as it is deep. Facing Chiyoda-dori, the coffee shop is between two thick, concrete pillars, its front all glass, while you can clearly see the Probat roaster through a smaller set of windows to the right of the second pillar.

There’s a sliding door, opening to the left, on the left-hand side, and a large single window on the right, with a long wooden bench outside on the pavement. There’s a small outdoor seating/smoking area to the left, where the side of the building is at 120° to the front, rather than the usual 90°, leaving a small, recessed triangular area with a short bench and stool. In another unusual feature for Japan, Glitch has a takeaway window here, which opens directly onto the counter.

Inside, the counter is at the back on the left, occupying the space directly opposite the door, extending into the additional space to the left. A set of six V60s on beautiful, iron stands, is at the front of the counter, facing the door, while the La Marzocco Linea espresso machine is down the right-hand side.

A cocktail table and two high, round stools occupy the window to the left of the door. Beyond this, a window fills the space along the side of Glitch, housing a set of retail shelves, with the cakes on the top. You order here, at an awkwardly-positioned till on the corner of the counter, then you take a seat.

The majority of the seating is in the middle, between the counter and roaster, starting with a three-person window-bar to the right of the door. Behind that, in the middle of the room, two rectangular tables have been pushed together to form a single, six-person communal table. There are two more one/two-person tables in front of a bench running along the back wall, while if you want to watch the pour-over being made, try to get one of the four stools in front of the espresso machine down the right-hand side of the counter.

The roaster is mostly in action at the weekends, when the right-hand third of the space is off limits (although there’s no physical separation between it and the rest of the coffee shop). However, when it’s not in use, the four-person round table in the window can be used for additional seating.

I visited twice, once in October 2018, when I was in Tokyo at the end of my around the world trip, and again in September 2019, at the end of the first of this year’s two trips to Japan. Both times I indulged in the tasting flights and, for once, I made extensive notes. So, just as I did with Maruyama Single Origin, where I wrote up my coffee experiences in a separate post, I’ve done the same with Glitch.

All I’ll say here was that on both occasions, the coffee was awesome, some of the best I’ve tasted. And I had an excellent sticky (but not too sticky) walnut and raisin cinnamon bun on my first visit.