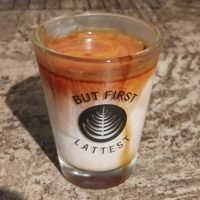 Lattest, the self-style Omotesando Espresso Bar, is in good company, Omotesando being the home of several excellent coffee shops, including Sarutahiko Coffee, Ratio &C and, of course, Koffee Mameya. It’s also across the street from Bread, Espresso &, where I had started my current Tokyo coffee adventures the day before. It also helps that Lattest is a few minutes’ walk from both my hotel and my office for this trip.

Lattest began in 2012 and now boasts six branches, this being the original. There’s an evening espresso/alcohol bar in Azabujuban, a bag/shoe shop across the road (but not coffee) and three coffee/bike shops, continuing the long association between espresso and cycling. Two are in Tokyo, with the third in Kyoto.

Lattest does pretty much what the name says, serving a range of espresso-based drinks, including the synonymous “lattest”, an espresso shot over cold milk. All the coffee is roasted in-house, originally on the roaster in Glitch Coffee, but now at its own dedicated roastery. There are two single-origins on espresso, plus three others roasted for filter and available to buy in retail bags. During the week, you can order pour-over, plus there’s a small selection of other drinks, a handful of cakes and a toasted sandwich option if you want something more savoury.

Lattest is on one of the jumble of narrow streets north of Omotesando Avenue and west of Aoyama Dori. It’s also directly across the street from Bread, Espresso &. Set well back from the street, it’s behind/above a basement-level courtyard, with access to the left, which leads you along the front of Lattest. There’s a solitary high, round table out here on the left, with three plastic stools for those who want to sit outside.

Lattest occupies a single, open concrete shell, the windows along the front joined by more along the left-hand and back walls. A large, concrete counter is against the right-hand wall, set back from the two right-hand windows, which leaves space for some seating. The second of the windows is set slightly forward of the first, leaving space for a four-person window-bar to the right of the door. Meanwhile, there’s a table at the end of the counter, with a pair of box-like seats, facing the bulk of the Nuova Simonelli espresso machine and its two grinders. The long part of the counter, where you’ll find the till, looks out across Lattest, a lovely, large, rectangular wooden communal table occupying the centre of the space, seating 14 using a mixture of chairs and stools, six down either side and one at each end. The remaining seating consists of two wooden bench seats, one running along the left-hand wall, the other along the right-hand side of back wall, set back slight from the left-hand side to create a long nook. Both of these have low, square wooden tables, each with a chair, the one to the left having five tables, while the other has four.

Despite the multitude of windows, the lighting can best be described as subdued due to Lattest’s position, set back from the street. Therefore the multiple spot lights and three large lights above the communal table are welcome. If I had one complaint, the bare walls, floor and ceiling do nothing to absorb noise, so it can get very loud, very quickly. All it took during my visit was a solitary, noisy child.

I was served by Yumi, who is the manager and who also roasts Lattest’s coffee. During my visit, the espresso was an Ethiopian, which, Yumi explained, was her favourite, although she occasionally changes it (when I returned the following week, it had been joined by a dark-roast Brazilian). I tried it as an espresso which was pulled commendably short. The first thing to hit me was the wonderful floral smell, while the initial sip revealed some acidity that lessened on the second (and final) sip. All-in-all, it was gorgeous, a beautiful, well-balanced espresso.

I popped back early the following week to try the eponymous “lattest”, a 100ml glass of chilled milk over which a single shot of espresso is extracted. It is exactly the sort of drink that I usually avoid, so I was pleasantly surprised. The espresso starts at the top, so you initially get quite a hit, then it slowly sinks/mixes with the milk, the result being an almost dessert-like drink. Not something I’d want every day, but a nice change from my usual cortado or flat white!

September 2019: I returned a couple of times on my latest trip to Japan, once for a latte to go and the second time for a more leisurely pour-over, made with a medium-roast Kenyan. Impressively, Yumi recognised me the instant I walked in the door! She also told me about the move from Glitch Coffee Roasters to Lattest’s own dedicated roastery.