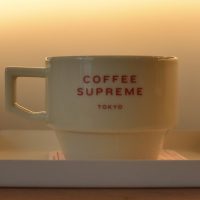 Tokyo has, I quickly discovered, a very international coffee scene, something it has in common with London, with brands from all around the world. This includes California in the USA (Verve, Blue Bottle), Europe (Fuglen, Stockholm Roast) and Australia (Single-O). New Zealand is represented by the likes of Allpress, and, since October 2017, Coffee Supreme, which opened in Shibuya, a couple of streets away from the original Fuglen.

I first visited in July 2018, tipped off by Little Nap Coffee Stand, calling back a year later during my visit in September this year. Located in the tangle of streets north of Shibuya station, Coffee Supreme is at the southwestern edge of Yoyogi Park, occupying the ground floor of a long, extremely thin building that’s also home to a pair of Kiwi restaurants.

The coffee is from Coffee Supreme’s Melbourne roastery, with house-blend, guest and decaf on espresso, the menu including Kiwi staples such as flat white and long black. There are three monthly single-origins, one of which is on batch brew, the option changing daily, with all the beans (blends and single-origins) available in retail bags. There’s also craft beer, and, if you’re hungry, a small range of cakes, toast and pies.

You can read more of my thoughts after the gallery, where all the photos are from my 2018 visit unless otherwise noted.

Coffee Supreme occupies the ground floor an extremely thin building at the junction of two near-parallel streets. Although very, very long, it’s not very deep, which can make moving around inside a little tricky, particularly when more than half the depth is occupied by the counter. This runs along most of the back wall, opposite a long line of floor-to-ceiling glass windows, mounted concertina style so that they can be pulled fully back when the weather is good, effectively leaving Coffee Supreme with an open front.

If the windows are shut, there’s a bright red door on the left, followed, a little way to the right, by a four-pane window and a longer, ten-pane window to the right of that. The door opens into a retail section with shelves on the back wall to the left of the counter, which starts with the till opposite the first set of windows. It then runs all the way to the end of the right-hand windows, where you’ll find the La Marzocco Linea espresso machine and its two grinders, a Mythos One for the house-blend and an EK43 for the guest and decaf.

There’s a small extension to Coffee Supreme to the right of the counter/windows, with the counter sloping at a 30° angle until it meets the back wall. You can sit at the counter, by the espresso machine, where you’ll find three stools, or you can squeeze by and sit in the extension. There’s a single stool along the sloping part of the counter, with two more at a little bar against the back wall. Alternatively, there’s a three-person bar along the front wall. Finally, you can sit outside on a row of low stools in front of and to the right of the windows.

I paid Coffee Supreme a couple of visits when I was in Tokyo in July last year. As I’ve mentioned before, good decaf can be hard to come by in Japan, so when I saw that Coffee Supreme was actively promoting it, I decided to have a decaf flat white. My coffee was presented on a small, metal tray (a common feature for all of the coffee), the decaf going very well with the rich, creamy milk. I returned a few days later when I treated myself to a double espresso of the house-blend, served in an oversized cup. A full-bodied coffee, it was well-balanced and well-rounded, with an all-round mouthfeel.

On my return in September this year, I’d planned to have filter, before the sign by the till caught my eye, quietly proclaiming “Pacific Island Coffee Week”. This offered a single-origin from Vanuatu, an island-nation about 1,000 miles east of Australia’s northern coast. Having never had coffee from Vanuatu (and not even knowing that it grew coffee until I saw the notice!) I had to try it, particularly since Coffee Supreme was down to its last bag. I went for a double espresso, and was rewarded with a gorgeous, rich, full-bodied coffee with a classic espresso profile.

Liked this? Then take a look at the rest of Tokyo’s speciality coffee scene with the Coffee Spot Guide to Tokyo.