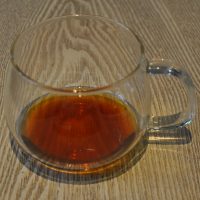 Down a narrow alley in the Aoyama business/shopping district, you’ll find Blue Bottle above the Cabane de Zucca clothing store, accessed via an external flight of concrete stairs on the left. After quite a climb, you reach a small, sheltered landing with an automatic, sliding glass door to your right. This leads you to the back of Blue Bottle, while the front faces the street, a balcony overlooking a tree-filled courtyard.

Long and thin, the back is occupied by a generous counter, with the open-plan kitchen behind, occupying maybe two-thirds of the store’s width. You order to the left, dual tills facing the door, menu hanging above them. There are also printed menus on the counter, along with models of the items from the breakfast/lunch menu. Immediately to your right, and easy to miss, since it’s effectively behind you, is a separate retail counter selling beans and coffee-making equipment.

The front of the store, plus a large alcove at the right-hand end, is devoted to seating. This starts with a standing bar against the left-hand wall, followed by some low, round cushion seats with small, round coffee tables by the retail counter. A long, thin, high communal table with 14 high stools runs lengthways in front of the counter but set well forward, leaving plenty of space for those waiting to collect their coffee. Beyond the communal table/end of the counter, are two short rows of two-person tables, running front-to-back. At the far right-hand end there’s a slightly raised area with square cushion seats running around all three walls, lined by small, round coffee tables, with more seating, in the shape of further square cushions, in the centre, arranged around large, wooden cylinders which act as tables.

However, possibly the best part is outside, where a narrow balcony runs almost the full width of Blue Bottle. Split into three bays by two concrete pillars, the first bay has a bench-seat at the left-hand end, while the remaining bays have their own two-person square tables. Alternatively, the middle and left-hand bays have three wooden tables built into the balcony’s balustrade where you can stand with your coffee and admire the foliage.

The interior is minimalist, verging on the austere, with plenty of clean lines, (mostly) concrete floor, walls and (very high) ceiling. There’s plenty of natural light: with windows between the pillars at the front, and although it can be loud when busy, the bustle stops the minimalism from being too severe.

The counter has a small syphon station next to the till, but most of the coffee is along the front, starting with a seven-station brew-bar, using Blue Bottle’s own-design pour-over cones, and ending with a low-slung Kees van der Westen Spirit espresso machine. Sadly, the American influence comes through with counter service, but at least here you’re given a ticket with your name and a number on it so you can match up your coffee at the counter, which means the baristas don’t have to holler your name.

Opening in 2015, this was the second Blue Bottle in Tokyo, the chain having grown to seven by the time of my first visit (and 14 by 2019!). There’s a single-origin on espresso with a different single-origin on pour-over, which change every couple of weeks. On my first visit, a quick coffee-break excursion from the office, I had a cappuccino made with the single-origin espresso a Brazil Faf Jose Ferreira. This was gorgeous in milk, really chocolatey, with hints of caramel. Very rich and smooth, it was one of the best of my trip.

I returned for a more leisurely lunch later in the week, selecting the Blue Bottle breakfast toast: an enormous slice of Japanese toast with a cylinder taken out of the middle into which is placed a poached egg. The resulting bread hole, is served (toasted) to the side. There’s also a dollop of smashed avocado and a hint of cheesiness on top of the toast. All-in-all, an interesting twist on poached egg & avocado on toast and quite delicious.

I paired this with a Kenyan single-origin pour-over. This smelled gorgeous, with beautiful floral notes, while in the cup, it was well-balanced, smooth, subtle, fruity. It tasted just as good as it cooled, holding its own even when cold.

2017 – 2019: due to its location just around the corner from my office, I’ve visited Blue Bottle on every one of my Japanese trips. I can confirm that the coffee is still every bit as good!

September 2019: you can see what I made of Blue Bottle’s Nakameguro location, the fifth to open in Tokyo.