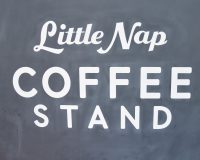 In a small corner in the northwest Shibuya in Tokyo, west of Yoyokgi Park, there’s an interesting cluster of coffee shops, including the new branch of Switch Coffee Tokyo opposite Yoyogi-Hachiman station, another new arrival, Coffee Supreme Tokyo, and old hand, Fuglen. However, one can argue the trendsetter that started it all is just a little north of the station, where you’ll find a tall, thin building backing onto the railways tracks, home, since 2011, to Little Nap Coffee Stand.

Little Nap now boasts a roastery a 10-minute walk away on the other side of the station, but this is the original, a narrow, wedge-shaped space that serves four seasonal single-origins on pour-over (hot or cold), an impressive output for an infeasibly small space. When it comes to espresso, there’s the house-blend, available as espresso, macchiato or Gibraltar (the first time I’ve seen that in Japan outside of Blue Bottle Coffee), all served hot and only available if you’re sitting in. If you want a longer drink, there’s a choice of Americano, latte (hot or iced) or cappuccino. There’s also cakes, sandwiches, ice cream and a selection of retail bags to take home with you. Little Nap’s also crammed in an impressive sound system!

Yoyogi Park is part of the kilometre-long stretch of green, open space that separates Shinjuku to the north from Shibuya to the south, two teaming, bustling, overflowing metropolitan areas at stark contrast to the grass, trees and lakes of the parkland. Little Nap Coffee Stand has inherited something of the park’s tranquillity, set, as it is, directly opposite the main western entrance to the park. Here the traffic thunders by on a north-south arterial road, threatening to shatter the calm, but Little Nap is off on a quiet one-way street, a side loop, separated from the main road by its own little slice of green, complete with mini baseball parks.

All this backs onto what might be the quietest railway I know of. Not quiet in terms of volume of traffic, rather by virtue of the lack of noise as the trains slide by quietly by. Unlike many of Tokyo’s railways, which are either on stilts on in tunnels, this one runs along at ground level, but despite there being a train every minute or so, I hardly heard them go by once I was inside.

Which brings us nicely to Little Nap, which is in a long, thin residential building that is three storeys tall. There’s a roof-balcony topping things off, although this doesn’t really apply to Little Nap, which occupies the ground floor, with a design agency next door in what looks suspiciously like it might have once been the garage. Oh, and the building is wedge-shaped for good measure. Because, hey, where’s the challenge in just having a long, narrow building when you can have a long, narrow, wedge-shaped one instead?

The door to Little Nap is on the far left-hand side, where the building is at its deepest. Rather than opening in (no space) or out (might hit someone), the solid metal door slides on runners to the right, partly obscuring the large window next to it every time someone goes in or out. Between them, door and window account for half of the front, the remainder occupied by a three-person bar, should you decide to sit outside.

Mind you, inside there’s not much more seating. A long bench runs all the way along the left-hand wall, which will sit maybe six people, while there’s a four-person window bar to the right, and that’s it. The rest of the space is taken up with the counter, which runs along the back wall, occupying more and more of the space as Little Nap narrows. Despite the lack of seating, customers, as seems to be the case in Japan, linger over their coffee, perhaps drawn by the air-conditioning, a real boon since I was there during the hottest heatwave on record (it was 34⁰C and humid that day).

Turning to the coffee, everyone else was drinking iced something or other, but I’ve yet to reach a temperature where I don’t want my coffee hot, so I eyed up the Synesso and Little Nap’s house blend. I was tempted by the Gibraltar, but instead went for a straight espresso, rewarded a really short shot, served in a classic black cup with a glass of water on the side. It was a lovely, well-balanced shot, with a back-of-the-mouth taste and it was gone in two sips. Highly recommended!

For an alternative view, check out this by Coffee Drinkers Make Better Lovers, from a visit in 2013. Meanwhile, here’s a more recent viewpoint from Audrey of Just Curious to Know, from a 2017 visit.