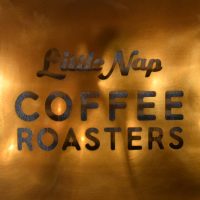 I discovered Little Nap, the Tokyo-based coffee shop/roaster chain (of precisely two locations) when I visited the original, Little Nap Coffee Stand, in the summer of 2018. During that trip I also popped over to the second location, Little Nap Coffee Roasters, a short, 10-minute walk to the southwest. However, for various reasons, I never managed to write it up, so last week, on my most recent trip, I returned to check that nothing had changed.

Little Nap occupies a narrow, three-storey, standalone building on the south side of the busy highway which runs through the southern end of Yoyogi Park to the east. Downstairs, at the front, is a compact coffee shop, while at the back is an equally compact roastery. The first floor is home to the Little Nap Record Shop and, during my visit in 2018, hosted a pop-up kitchen, while the top floor is a gallery with rotating displays.

Little Nap serves a house-blend from a concise, espresso-based menu, with four seasonal single-origins on pour-over (hot or cold), with all the coffee available to buy in retail bags. There’s also a small range of sandwiches and hot dogs, plus a selection of cakes if you’re hungry.

You can read more of my thoughts after the gallery, where the photos are from 2018 unless otherwise noted.

Little Nap is something of a speciality coffee pioneer, having first opened in 2011, with the roastery following on six years later in 2017. Little Nap Coffee Roasters occupies a striking, white-tiled building which is difficult to miss. There’s not a lot going on outside, with a single repurposed barrel acting as a coffee table, seating provided by a cluster of stools.

The front is almost all glass, with three, narrow wood-framed windows on the left, and a large, glass door on the right. Inside, it’s long and thin, with the compact coffee shop at the front, bigger than the original Little Nap Coffee Stand, but not by much. The counter is on the right, set back from door, with the seating is arranged in an L-shape along the front and down the left-hand walls.

Although the actual seating has been upgraded since I was there in 2018, the layout is the same. There’s a barrel with two stools between the door and counter, with three two-person tables in the window to the left of door (replacing a communal table). There are three, small two-person tables along the left-hand wall opposite the counter, each with a pair of stools. Finally, at the back, opposite the roaster, is a two-person table, facing the wall.

The counter starts with a large, wood-framed display case for the cakes and retail beans, which faces the door, the concise menu on the wall to your right. The till, where you order and pay, is to the left, then, down the side of the counter, comes the Synesso espresso machine, its grinder, and, at the back, a pour-over station, with a selection of single-origin beans, displayed in glass jars.

I ordered a V60 of the Ethiopian single-origin which came in a mug. An interesting coffee, it held its own as it cooled, really evolving once it reached room temperature. On my return last week, I had a Gibraltar (think cortado) served in a glass jar. This was excellent, milk and coffee combining to produce a biscuit-like flavour. I paired this with a cinnamon muffin, which was just as good.

All the coffee at Little Nap is roasted on the Probat roaster, which stands at the back of the counter, opposite the two-person table. It’s in action on Tuesdays and Friday, when, I’m reliably informed, the shop gets very hot! The roaster marks the start of the roastery proper, which is in a separate room at the back of the ground floor. However, that’s not the end of things, because Little Nap has always been about more than just coffee: if you head back, through the roastery (always a neat experience) you’ll find a set of stairs against the back wall, with a sign pointing up to the Little Nap Record Shop.

This continues a long association between Little Nap and music; Little Nap Coffee Stand has a serious sound system and it’s the same here: during my visit, there was a DJ downstairs and another one upstairs, playing different tunes in the record shop, which sells actual records (aka vinyl), by the way.

The record shop is at the top of the stairs, at the rear of the first floor, while the other end was occupied by a pop-up kitchen. The steps, which are really steep, run along the right-hand wall and continue to the top floor, which is used as a gallery (and, judging by the musical instruments up there, a rehearsal room or music venue). During my visit, the gallery hosted a display of lamps.

Meanwhile, back downstairs, I tried out the pop-up kitchen. The actual kitchen is at the front of the building, occupying maybe one third of the floor, with the tables (a pair of six-person communal tables and a two-person table at the back) occupying the space between the kitchen and the record shop.

The kitchen was serving French toast, with three options on the Japanese menu. Rather than risk it, I just ordered French Toast which was excellent: two slices of very thick, fluffy bread, sandwiched together with an eggy mixture then covered all over in a rich batter and fried. I demolished mine despite not feeling very hungry. Awesome!