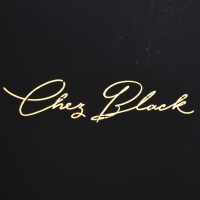 Like yesterday’s Coffee Spot, BLUEKING Coffee, Chez Black Coffee was a chance discovery, something seen through a window once again drawing me in. I was wandering the leafy streets of the old French Concession, perhaps my favourite Shanghai district, when the awning, with its single word, “Coffee”, caught my eye. I crossed the road, more in hope than expectation, but then, glancing in the window, I saw the most amazing-looking espresso machine sitting on the counter. A modular design, akin to the Modbar and Mavam systems, this looked like it had been designed by a Steampunk enthusiast, who’d crossed it with a lever machine, the result all angular lines and brass cylinders. Naturally, I had to go in.

Espresso machine aside, Chez Black is a lovely spot, a cross between a coffee shop and a library. There’s plenty of seating options, each one cosy in its own particular way. You can sit at outside, at the counter, chatting with the baristas or at the back with the books, where there’s a delightful mezzanine. The coffee is from Shanghai’s Yûn Coffee Roasters, with a single-origin on espresso and two more on pour-over, backed up by a small but delightful cake selection.

Chez Black Coffee which opened in December 2018, is the second in the Chez Black stable after the original Espresso Bar, which opened earlier in 2018. I discovered it while walking between % Arabica’s original Shanghai coffee shop, on Ferguson Lane, and the second Rumors, around the corner on Xingguo Road. Interestingly, all three share a common theme: the owners married someone from Shanghai, opening (several) coffee shops in their spouse’s home city, although in the case of % Arabica and Rumors, the new arrivals were Japanese, while Chez Black’s owner, Paul Franssen, is from Amsterdam.

From the street, there doesn’t seem to be much to Chez Black, just a simple, square glass-paned front, most of which is occupied by a pair of double doors, through which you can see the counter and its eye-catching espresso machine. You can sit out here, on a small sofa-bench to the left of the door, or inside, between the door and the counter, at a two-person table against the right-hand wall. Alternatively, there’s a padded bench with a small coffee table against the left-hand wall.

The counter is set back from the door, running along the right-hand wall. You can sit here if you like, at one of four high stools towards the back, past the cake and the till, where you’ll be up close and personal with the espresso machine, which, I learnt, is from Italian company, XLVI.

Although that’s all you can see from the window, Chez Black keeps going, forming an L-shape. There’s a four-person table immediately beyond the counter, with a pair of three-person cocktail tables beyond that, in front of a floor-to-ceiling set of bookshelves, the library part of Chez Black. A ladder on the right gives access to the higher shelves. Finally, extending to the left, you’ll find the mezzanine and the last of the seating.

The space underneath the mezzanine is given over to a small, cosy area with an armchair and a comfy chair, facing each other over a coffee table. Meanwhile, to the left, steps give access to the mezzanine, which has a large mirror on its front wall, creating an illusion of space, while against the left-hand and back walls is a three-piece suite, consisting of two armchairs and a sofa.

Although I don’t come to China expecting everyone to speak English, at Chez Black, both my baristas, and one of the customers, who was also called Brian, all spoke great conversational English, making chatting easy. It also helps that the library (which now has a copy of The Philosophy of Coffee) has an equal mix of books in English and Chinese. There are other neat touches, including power outlets at almost every seat, with Chinese, American and European sockets, plus USB sockets and, in case you’ve forgotten yours, USB leads as well.

Turning to the coffee, there were two single-origins on pour-over available through the V60 (an El Salvador and a Guatemalan during my visit) and a very lightly roasted single-origin Ethiopian espresso (lighter, for example, than the Ethiopian single-origin at % Arabica). It was also different in character, slightly tarter, with more acidity, unlike anything that I’ve had on this visit to Shanghai, making it a welcome change (the closest was the espresso at UNDEF/NE). I paired this with amazing, rich, creamy strawberry cheesecake, one of the small selection available up by the till.

All-in-all, Chez Black is a lovely, relaxing spot that I wholeheartedly recommend!