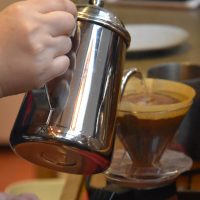 As I’ve written elsewhere, I love the leafy avenues of Shanghai’s old French Concession, which makes a great change of pace from the bustle of the centre. There’s excellent coffee here too, including a find from my first visit in 2016, Rumors Coffee Roastery on Hunan Road. This is the original Rumors, established in 2011, but there’s a second, larger branch on the nearby Xingguo Road. Since I failed to find it on my return in 2017, I made a point of tracking it down during my latest trip.

In a city where many speciality coffee shops have a western in style/influence, Rumors draws its inspiration from the traditional Japanese kissaten, immediately calling recalling the likes of Tokyo’s Café de L’Ambre and Chatei Hatou. Founded by a Sino-Japanese couple, it’s in some ways a trend-setter, the likes of % Arabica and Chez Black Coffee following it into the area.

Rumors roasts all its own coffee on-site, serving a wide range of origins. If you’re looking for an espresso or flat white, however, you’re in the wrong place, since Rumors only serves pour-over through the V60. Offering full table service, pick your bean from the extensive menu, sit back and relax.

The second of (for now) three Rumors, with the third recently opening in Pudong on the other side of the river, it’s larger than the original. Just around the corner from Chez Black Coffee, it’s about a 10-minute walk from the original, on the slightly busier Xingguo Road, which is lined with restaurants and shops.

Simultaneously like and yet unlike the original, the Xingguo Road branch has a more open, spacious feel, without sacrificing original’s intimacy. You can, of course, sit at the counter to watch your coffee being made (no prizes for guessing where I ended up) but there are more seating options here, including tables, a cosy sofa and benches outside.

Rumors occupies a long, thin, slightly wedged-shaped space on the western side of Xingguo Road. Fairly low at the front, it’s higher at back, helped by having a slightly lower floor to the rear, plus a sloping roof which starts half way back. The front is pretty much all windows, except for the door on the far left-hand side. Benches run along the windows outside, which are slightly recessed from the pavement. The first spans almost half the width of Rumors, while the remaining two get successively shorter.

This makes for a very bright interior, while a skylight, running the width of the building in the middle of the roof, ensures that the back is also pretty bright. There’s a shallow step up onto a wooden floor, with a row of three two-person tables running along the windows to your right, followed by a second row of three behind that. The furthest table in each row end by an L-shaped padded bench against the right-hand wall.

The rear section is accessible via a couple of steps, either directly ahead of you as you enter, or about two-thirds of the way along on the right. There’s an enclosed kitchen in the right-hand corner at the back with the small, low roastery space above it, accessed by ladder. Meanwhile, the middle of the back wall is occupied by the counter which has five high chairs, three along a straight section at the front, then two more at the left-hand end, where the counter curves 90° to meet the wall. Finally, there’s an L-shaped arrangement consisting of two large, black sofas in the back, left-hand corner.

In a refreshing change from the likes of % Arabica, Rumors offers full table service. You are greeted as you enter, shown to a table and provided with a glass warm water, which is constantly topped up through your stay. The extensive menu has perhaps 20 origins, all on display in jars behind counter. These range from medium to some very dark roasts, with a few unusual origins, including Australia, Hawaii and Yemen, which I selected.

The coffee is made behind the counter, where the grinder is to the left, with a gleaming row of pouring kettles at the front, filled from a single kettle on a hob beneath the counter. Unlike modern pour-over techniques, there’s no pre-rinsing of the filter paper. Instead the coffee (which is the only thing to be weighed) is ground straight into the paper, then the pouring commences. Everything’s done by eye, with no timers in sight.

My Yemen Mocha Matari was a little too darkly roasted for my palate, but resulted in a pleasant enough cup, with a rich, deep taste that grew on me as it cooled. I paired it with an excellent, light chocolate mousse with chocolate slab coating, although what I really wanted was the French Toast, which, sadly, is only on offer at weekends.

For a different view of Rumors, try this take by local blogger, Sugared & Spiced. This was from a visit in 2015, so you can also see what’s changed in terms of decor and layout.