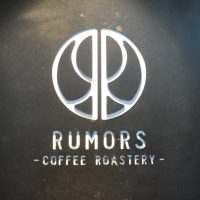 Most of the speciality coffee shops I visited in Shanghai in 2016 were very western in style/influence. In that respect, Rumors Coffee Roastery, in the old French Concession, stood out from the crowd, drawing its inspiration from Japan, where it is reminiscent of the likes of Tokyo’s Café de L’Ambre.

Rumors roasts all its own coffee in its second branch on Xingguo Road, serving a wide range of single-origin beans. If you’re looking for an espresso or flat white, however, you’ve come to the wrong place since Rumors only serves pour-over using Kalita-style ceramic filters. Pick your bean and the barista will make it there and then behind the counter.

Talking of which, Rumors has counter seating, another typical feature of a traditional Japanese coffee shop. It’s a fairly small place, so the seats are limited. Like many of the small places I visited in Shanghai, Rumors has no air conditioning, so it can get very hot and humid inside, despite the best efforts of the ceiling fan. If it’s too hot, you can sit outside, although it’s unlikely to be any less humid!

You can, of course, buy any of the beans to take home with you and, if you’re hungry, there’s a range of cakes.

Rumors is in Shanghai’s old French Quarter, a delightful part of town, west of the centre, with relaxed atmosphere, although I was there on the weekend. Tucked away on the quiet, curving Hunan Road, just north of the busy east-west Huaihai Middle Road, it’s not somewhere I would have found, were it not for Jennifer, the local student who I met in And Coffee, who told me about it. This is, by the way, the original Rumors. There is now a second, larger branch on the nearby Xingguo Road, a few minutes’ walk to the west. This branch of Rumors is around the corner from Shanghai Library, the library’s stop on Line 2 of Shanghai’s excellent metro system making it very easy to get to (once you know where it is!).

From the street, Rumors cuts a very photogenic figure, with numerous people coming along to take pictures during my visit. There’s a door to the left, and on the right, a large, open window-bar with seats outside. Between the two is a smaller, open window-bar with a couple of chairs next to the door. I took this to be a take-away serving area, although it was closed during my visit. Finally, there’s a bench right in the middle.

Inside, Rumors is harder to describe, occupying a rough triangular shape, the long side running along the street. From the door, a corridor runs to the back, giving access to the counter, which is at the back on the left, while the rest of Rumors slants off to the right, ending with the open window bar. This is doubled-sided with three chairs and a barrel on pavement, looking in, and five stools on the inside looking out, although you’d probably struggle to fit more than three people on the stools.

The counter runs parallel to the back wall and then curves around at the right-hand end. Five stools run along the counter where you can sit watching your coffee being made. There are also two small, round tables, one at the end of the counter with an armchair and a fold down chair, while the other is against the opposite wall, next to the window bar, with a single dining room chair.

The décor is gorgeous, by the way, dominated by some lovely dark wood. This includes the counter, the furniture and the window bars. Behind the counter is a large cabinet mounted on the back wall, consisting of multiple rows of cubby holes, each with a glass jar holding the coffee.

Rumors has a multi-page menu listing about 20 single-origins from around the world, all with tasting notes. Somewhat spoiled for choice, I selected a Rwandan, which turned out to be a very fine, subtle coffee, with a delicate flavour. Well-rounded, nicely balanced, it went down very smoothly. My only complaint would be that it was served directly into the cup, rather than presented in a carafe, but on the other hand, the cup, with an awesome saucer, was so lovely that all was forgiven.

I paired this with a small, but very fine, slice of lemon cheesecake which nicely tided me over until dinner-time.

For a view of the second Rumors branch on Xingguo Road, try this take by local blogger, Sugared & Spiced.