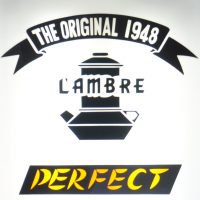 This is a very different beast, more akin to a bar than a coffee shop. In the case of L’Ambre, all the coffee is roasted on-site on a pair of small roasters at the front of the store, while coffee is made and consumed at the back, in a long, low, smoky room with a counter/bar on the left and a handful of tables on the right.

If you can, sit at the counter, the further along the better, where you can watch your coffee being prepared for you using a linen filter. This is really old-school: no scales, timers or temperature-controlled kettles. It’s coffee as a performance and although the end result might not please everybody, it’s an experience I would recommend trying. Be warned, though, L’Ambre allows smoking and it’s pot-luck whether you end up sat next to someone lighting up a cigarette.

Café de L’Ambre has been going since 1948, putting it on a par with London’s Bar Italia, but not quite in the same league as Café de Flore in Paris. However, in an industry where being 10 years old makes you venerable, it’s in another league! It’s also quite famous, making it into mainstream guidebooks, although I have Commodities Connoisseur and Bexs of Double Skinny Macchiato to thank for bringing it to my attention.

L’Ambre is in Ginza, on a back street running parallel to the main drag. Set back a little from the street, L’Ambre’s a blink-and-you’ll-miss-it place, although at least the narrow store front has decent external signage. However, it’s relatively easy to find, at least on roasting days: I could smell it from down the street!

Before going through the recessed door on the left, take a look through the window on the right, particularly if it’s a warm day and there’s roasting going on, since it’s likely to be flung wide open. Inside you’ll see a tiny room with not one, but two roasters, going full-tilt.

Back inside, there’s a narrow corridor running alongside the roastery, offering further opportunities to watch the roasters in action, but be careful not to block the door! At the end, a tiny cash desk/retail counter partially blocks your way. You wait here to be seated on the way in, and pay here on the way out.

Beyond the cash desk, things widen out a bit, but L’Ambre’s still a low, long, narrow place with a subterranean feel to it. Seven, round, two-person tables line a red-leather bench against the right-hand wall. All bar the first are pushed together in pairs to form four-seaters, but I suspect that the arrangement’s flexible.

On the left, however, is where you want to be. A wooden-topped counter runs the length of the room, curving at the end to squeeze more seating in. In all, there are 10 red-leather bar stools, each mounted on a raised, tiled footrest. If you can, grab a seat right at the curve for the best view of the coffee being made.

Once seated, a menu and glass of water appear, the latter being continuously topped up throughout your stay. The barista takes your order, then makes your coffee behind the counter. There’s quite a selection on the menu, including a variety of origins. What struck me was the aged coffee (green beans deliberately aged in barrels to improve the flavour), so I had to try one, selecting the 2004 Kenyan. The barista asked if I wanted light, medium or strong, which I initially assumed was down to the roast, but am now more inclined to think is down to the coffee/water ratio. Either way, I went for medium.

I was fortunate to be sat right at the curve in the counter, having the spectacle of my coffee (and everyone else’s) being prepared directly in front of me. For a detailed description of the process, check out the gallery, although third-wave purists might want to skip that bit!

So, what was it like? Well, most importantly, I enjoyed it. It was recognisably coffee, but had notes that I’d not had before, although things became more familiar towards the bottom of cup.  I put the unfamiliar flavours down to the ageing process, although whether it “improved” the coffee, I can’t really say. On the whole, though, I think I prefer my coffee un-aged, thank you.

Although L’Ambre only serves coffee, there are a few coffee-based desserts at the bottom of the first page of the menu. I was recommended the coffee jelly with ice cream, plus a shot of coffee liqueur. This definitely tasted of coffee, particularly the liqueur, and had an interesting texture. I enjoyed it, was glad that I tried it, but I’m uncertain if I’d have it again.

A word about the atmosphere in L’Ambre. There are no windows and the lights are quite low (although not so low that you’d struggle to read). However, smoking is allowed and, in that confined space, the solitary person smoking while I was there was bad enough. I’m not sure I’d have stayed for long if another person had lit up.

If you like the sound of the traditional Japanese kissaten, but would like to try somewhere slightly less smoky, then I can recommend Chatei Hatou in Shibuya. Audrey Fiodorenko has also written about three of her favourite kissaten, one of which is Chatei Hatou. I also enjoyed Higashide Coffee in Kanazawa should you ever find yourself in the area.

If you’re in Shanghai, try Rumors Coffee Roastery on Hunan Road and its sister location, on Xingguo Road, both of which are modelled on a traditional Japanese kissaten (but with windows!), while if you’re in Bangkok, try Gallery Drip Coffee, a third-wave take on Japanese pour-over.