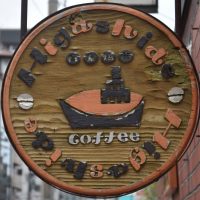 This time last week I was in Kanazawa on the north coast of Honshu, part of my short trip around Japan’s main island, where I unexpectedly found some excellent coffee. I say unexpectedly, since I wasn’t really looking, but I really struck it lucky with my hotel, with great coffee shops of varying styles and character all within a few minutes’ walk.

Higashide Coffee is a coffee shop/roastery in the mould of a traditional Japanese kissaten, such as Café de L’Ambre or Chatei Hatou, although the layout reminded me of a traditional American diner (Charlie’s Sandwich Shoppe, for example). All the coffee’s roasted on-site using what looks to me, at least, to be a very old Fuji Royal roaster, which sits in the window. In a move that I’ve not seen before, all the green beans are hand sorted before roasting, which is an impressive level of dedication!

There are around 20 origins to choose from, with roasts ranging from fairly light to very dark. They’re all available as pour-over, made to order behind the counter, while there’s also a limited espresso menu, plus a small selection of cakes. Be warned though, Higashide allows customers to smoke and, like many Japanese coffee shops, it’s cash only.

Higashide Coffee was suggested by my friend and local guide, Christopher, although he’s not visited himself.  Located in the heart of Kanazawa, between the Omicho Market and the castle, it was, more by luck than judgement, just around the corner from my hotel!

It occupies the ground floor of a long, thin two-storey building, standing alone on a street corner, one short block from the rear of Omicho Market. The short side faces onto the larger of the two streets, where you’ll find a single door recessed between two bay windows. What immediately caught my eye, in the bay window to the right, was the old Fuji Royal roaster. A glass door at the back separates it from the main body of the store, turning the window into a self-contained roastery.

The layout’s very simple, the counter occupying the entire left -hand side, while the right-hand side is lined with tables. Immediately to the left of the door is a cashier’s desk, where you pay on the way out. This is followed by a small gap before the counter proper, which has a row of eight chairs, easily the best seats in the house in my opinion.

On the right, opposite the cashier’s desk, is a small alcove providing access to the roastery and containing a low bookshelf, packed with volumes which you read while enjoying your coffee. Next comes a large, six-person communal table, end-on to wall, followed by three four-person tables along a padded bench beneath the windows.

The staff will indicate a seat for you, although if you’re on your own, you’re likely to be shown to the counter, where you’re free to choose your own seat. If you can, get one of the first two, since this puts you directly by the pour-over section, where a row of Melitta-style ridge-bottomed filters are in near constant use. Further down are two large kettles, constantly on the boil, followed by an espresso machine, a Rancilio Silvia, or something very similar (although all the while I was there, no-one ordered espresso).

In contrast to Café de L’Ambre and Chatei Hatou, both of which are basement-like spaces, Higashide is bright and airy, with windows all down the right-hand side. It also has pretty efficient air-conditioning, since on the humid day I visited, the air was remarkably cool and refreshing, despite two continuously-boiling kettles.

You’ll get a glass of water and a menu, plus a basket for your belongings so that they don’t have to touch the floor. There are about 20 different origins to choose from, listed in order of roast, from dark (top) to light (bottom). I selected a medium roast El Salvador and watched as it was prepared in front of me.

The cones are laid out in a row, each with an unrinsed filter paper in place. The beans are weighed and ground, the ground coffee going straight into filter paper. Next, a pouring kettle is filled from one of the two kettles on the range, then the pouring begins, with a first pour to let the coffee bloom and multiple main pours thereafter. The coffee’s then dispensed from the carafe into a cup for serving.

I was expecting the cup to be handed across the counter, but instead one of the staff comes around with a tray, presented you with your coffee, along with a ticket to take to the counter when it’s time to pay. Initially I found my coffee a little thin, but it matured and developed as it cooled, with fruity flavours and a certain sweetness coming to the fore.

I also indulged in a mocha ice cream (well, that’s my translation of it), one of two dessert options prominently displayed on the counter. Consisting of chocolate sauce, with cubes of coffee jelly and a scoop of vanilla ice cream, it’s topped off with an iced pour-over (prepared in a cocktail shaker) and more chocolate sauce. It looks like an ice cream sundae and the final touch is a biscotti, which takes the place of a wafer. You can eat it with a spoon (like I did) or let the coffee melt the ice cream and drink it like a milkshake. All in all, pretty awesome!