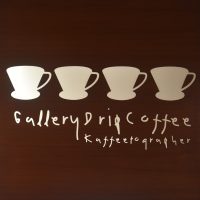 When it comes to speciality coffee in Bangkok, one of the pioneers, and one of the few I’d heard about before I reached the city, was Gallery Drip Coffee, recommended by the ever-reliable Simon from Fancy a Cuppa? and featured in his excellent book, Crossing Paths, Crossing Borders. Located inside the Bangkok Art and Cultural Centre, Gallery Drip Coffee only serves pour-over coffee (the clue is in the name), a style directly inspired by Japanese coffee culture.

It occupies a weirdly-shaped space inside the atrium of the Centre, with a long counter facing the door, which is where most of the action takes place. There are multiple single-origins on offer, seven while I was there, three of which were from Thailand and the rest from around the world, all roasted in-house. These are made using the V60, while there is also a house-blend of Thai coffee which is made using the Melitta filter and served with steamed milk to provide a latte substitute for those who like their coffee milky. Finally, if you want something sweet to go with your coffee, there’s a wide selection of cheesecakes and their ilk in a cooler cabinet at the end of the counter.

Although you can clearly see Gallery Drip Coffee from outside, you can only get to it from inside the main atrium on the ground floor of the Bangkok Art and Cultural Centre, where it’s conveniently located to the right of the door. Don’t, however, do what I did, and enter via the crosswalk from the elevated walkways: this takes you to the second floor and a rather tortuous route leads via several escalators and switch-backs to the ground floor.

The front wall of Gallery Drip Coffee is all glass, the door on the left-hand end. There are three four-person tables with stools outside in front of the windows, while a six-sided bar surrounds a wide pillar next to the door. Heading inside, Gallery Drip Coffee occupies a weird shape, with the outside, curving glass wall of the Bangkok Art and Cultural Centre forming the coffee shop’s back wall. The counter is directly ahead of you, with most of the seating off to your left, although there are four wide stools at the counter where you can watch your coffee being made.

Immediately to the right of the door, two high chairs, backs to the wall/glass, face the counter. Next is a set of floor-to-ceiling retail shelves made up, Ikea-style, of little boxes with merchandising, craft items, books, coffee and coffee kit. Four low, hexagonal stools stand in front of the shelves. The bulk of the seating is to the right of here, starting with a three-person table against the right hand wall. In front of that a second pillar matches the one outside, but with a four-sided bar this time. Off to the right, in a weird, square alcove with a glass wall at the far end, is a small three-person table, clearly visible from the outside. Finally a bench against the back wall/window between counter and pillar looks out onto the square in front of the Bangkok Art and Cultural Centre.

There’s clearly a hierarchy to the seating, with the counter seats and tables being the most valued. It was busy while I was there and there was much jockeying of position, people swapping seats as better options became available.

Gallery Drip Coffee was opened six years and two days ago on 1st May 2012, drawing on the traditional Japanese kissaten, something that was apparent as soon as I walked in to see the row of filter cones on the counter. Although a very different space, it was reminiscent of the likes of Tokyo’s Café de L’Ambre or Rumors Coffee Roastery in Shanghai (itself Japanese-inspired).

The counter has two pour-over stations, each with its own grinders and a pair of V60s, flanking a central Melitta filter. The menu’s on wall to the left of the counter, the only full, solid wall in the whole place. The beans, meanwhile, are displayed in glass jars at the end of the counter, above the cakes. You’re welcome to have a nose around before you choose.

During my visit, there was coffee from Costa Rica, Ethiopian, Guatemala and a Panama Geisha, along with three Thai coffees, all single estates. I zeroed in on the three Thai coffees, selecting the fruitiest smelling, the Mae Ton Loung from Doi Saket, Chiang Mai. This was served in a slightly flared, cylindrical, handleless mug and proved to be a full-bodied, full-flavoured coffee which held its own as it cooled.

I paired this with a slice of New York cheesecake, one of about eight on offer. To my mind, there’s something about coffee and cheesecake and this one didn’t disappoint, a classic of its kind, rich and creamy.