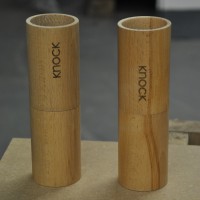 Knock came into being five years ago when Peter and his business partner decided to make beautiful, practical things for the coffee world. The first product was a knock-box, beloved of baristas everywhere as they knock the grounds out of their portafilters and, hopefully, into some useful container rather than all over the floor!

Knock’s second-ever customer asked about tampers. And why not? Now Knock produce all sorts of tampers, including all the unusual, hard-to-get sizes and the ingenious reversible tamper which can either have a flat or curved bottom.

Two years ago, Knock’s genius was turned to the humble hand-grinder. Hand-grinders based on ceramic burr sets have been around for a while. Indeed, I have a Porlex mini which now lives in my office and comes on holiday with me. In many ways, it’s revolutionised the way I drink coffee. However, it has its issues, largely around the size of the burr set which, when it comes down to it, isn’t terribly efficient.

At the heart of Knock’s new grinder was a 38mm steel burr set. This has several advantages compared to the more typical ceramic burr set of the same size. For a start, the steel burrs are sharper and very unlikely to break (although I’ve had no problems with my Porlex, I’ve heard several stories of ceramic burrs in other hand-grinders breaking).

In Peter’s opinion, the biggest difference between steel and ceramic burrs isn’t their sharpness, it’s the shape. Steel burrs can be machined much thinner than ceramics, allowing a more open design, which means in turn that the beans feed more easily into the burrs. This results in more even grinding, while in ceramic burr sets of a similar size, there’s a concern that beans fracture as they enter the burrs, resulting in an uneven grind size and, in particular, more fines (very small particles). It also slows down the grinding process. The other advantage is that the more quickly the beans feed into the burrs, the easier (and quicker) it is to grind.

Having decided on a steel burr set, Knock’s aim was to make the best possible grinder with the chosen materials. For reliability, the burrs are housed in steel, but Knock selected wood for the housing, resulting in the beautiful hausgrind (haus is German for house). I tried the hausgrind at the London Coffee Festival and even then I was impressed.

The next logical step was to build a smaller (and cheaper) grinder around the same burr set. Thus the feldgrind (feld is field in German) was born. To keep the cost (and weight) down, the feldgrind’s burrs are housed in aluminium, making the whole assembly smaller, with a smaller diameter cylinder. To further keep the weight down, the cylinders are aluminium too.

When I first saw the feldgrind at Cup North, I was simultaneously impressed and dismayed. While applauding what Knock had done, one of the main attractions of the hausgrind was the beautiful, wooden finish and, for me, burnished aluminium just isn’t the same.

I explained my concerns to Peter and (rashly) told him that if he made a wooden feldgrind, I’d buy it. In return, Peter extracted a promise from me to visit Knock on a forthcoming trip to Edinburgh, and, with a twinkle in his eye, told me that he’d have something for me.

You can see what that was after the gallery.

When I arrived, Peter gave me a tour and explained the history of the company (see above), then we got down to business.

Knock learnt a lot from the hausgrind and many of these lessons have gone into the feldgrind. For example, although in the hausgrind the cylinder which holds the burrs is the same as the one which catches the ground coffee, it needs an additional machined step for structural integrity. With the feldgrind, this machined step has been eliminated, speeding up production and keeping cost down.

Despite such improvements, mass production is still challenging. For example, the aluminium powder-coated cylinders still need hand-fettling to around 0.03 mm accuracy. Wood is also a challenging material since it’s much more variable than metal, depending on factors such as humidity.

So, down to the real business of the day: the world’s first ever wooden feldgrind. As much as I flatter myself about my role in its creation, Peter had always had plans for a limited number of wooden feldgrinds. He showed me a series of wooden cylinders, the heart of the wooden feldgrind: all we had to do was assemble them, along with remaining components, all standard items from the aluminium feldgrind.

Until you’ve tried to pick two matching wooden cylinders, you have no idea how hard it is. Matching grains, ensuring everything lines up, it was really stressful! Finally, I managed to pick the two cylinders that were going to form my feldgrind and we were off. Peter mocked it up, but I couldn’t take it away with me since the parts still needed assembling and the aluminium housing for the burrs bonding to the cylinder.

It was a bit of a wrench, having to leave my lovely grinder behind, but it couldn’t be helped. I had an anxious wait over the next couple of weeks, but one day the postman came and there it was, the world’s first wooden feldgrind (by now christened “Woody”).

I immediately put him to the test, grinding some beans side-by-side with my mini-Porlex. The first and most noticeable difference is how quick it is. I reckon I can grind beans in half the time using Woody (although Peter thinks my grinding technique is terrible and I should be able to halve the time again!). Comparing grind size and consistency, the differences were less obvious, but I’m convinced Woody produces a slightly more even grind.

The other major advantage of Woody over the mini-Porlex (and every other ceramic hand-grinder I’ve seen) is ease of adjustment. All you have to do is attach the handle and turn the thumb-wheel at the top. Even better, there’s a dial, numbered 0-12, so you can set the grind size precisely (with my mini-Porlex I’m never 100% sure I’ve got the grinder set to the same size!). As a result, I use Woody all the time, happily adjusting the grind setting first thing in the morning for my cafetiere, before tightening it up at lunchtime for my Aeropress.

The final bonus: Woody looks absolutely beautiful. Knock’s grinders might be considerably more expensive than their ceramic counterparts, but they’re worth every penny.

December 2015: Knock has won the 2015 Most Popular Coffee Spot Award for this feature on its hausgrind and feldgrind grinders.

September 2017: I now not only own Woody, but also Red, a feldfarb, plus the latest addition, an Aergrind. This has the same burr set but fits inside an Aeropress!