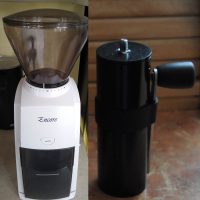 One of the first pieces I wrote for my Making Coffee at Home series in early 2020 was on the importance of grinding coffee at home. Every now and then people ask me for advice on what sort of coffee grinder they should buy and while the article has some general advice (always get a burr grinder), I stumble over the question of whether to recommend a manual or electric burr grinder.

Regular readers will know that I have a soft spot for manual coffee grinders. After all, I own three of them: a pair of Feldgrinds and an Aergrind, all from Knock. I do have an electric burr grinder, but this is built into my Sage Barista Express. In theory, I could use it for grinding for filter coffee as well, but in practice, I use it exclusively for espresso, sticking to my Feldgrind for my daily cafetiere, pour-over and AeroPress.

However, when I was visiting Amanda last November, I had the chance to use her Baratza Encore for an extended period of time. This allowed me to make a direct comparison between electric (the Encore) and manual (my Aergrind) grinders as I made our morning cafetieres and daily pour-overs.

Before I start, I want to be clear that this isn’t a review of the Baratza Encore or, for that matter, my Aergrind (you can read my detailed thoughts about it if you want). Instead, it’s a (subjective) judgement about the useability of manual compared to electric burr grinders. While I’m using the Aergrind and Encore as representatives of each type, I believe that my findings are fairly generic. It’s also worth saying that whatever conclusions I reach, they might not be your conclusions, since our priorities may well differ. Finally, since I’m used to my Aergrind, it will be my baseline and I’ll describe the differences that I found using the Encore.

Starting with the basics, I was grinding for a cafetiere in the morning (36 grams of coffee), while during the day, it was either for pour-overs using a V60 (again, 36 grams, albeit with a slightly finer grind) with the occasional Clever Dripper (30 grams) thrown in for good measure. In each case, I dosed the grinder: that is, I weighed the exact amount of beans required, then put them into the grinder.

Let’s start with capacity. My Aergrind, which is designed for travel, is pretty small. With the best will in the world, I can’t get much more than 25 grams of coffee into the grinder, so when grinding coffee for more than one (typically I grind between 15 to 18 grams for myself) it’s always going to be easier with the Encore, where I can tip the whole dose into the hopper. That said, if I use one of my larger Feldgrinds, I can grind up to 40 grams of coffee in one go, so it’s less of an issue for them.

Another factor is speed. I was surprised at how slow the Encore was (it does have a reputation as a slow grinder), seeming to take an age to get through each dose. However, a hand grinder is always going to be slower: typically, I take around two minutes of hand grinding to get through a 36 gram dose, where the Encore will take between 35 and 45 seconds, depending on the bean/grind setting. In defence of the Encore, its grind speed never impacted my coffee-making. There was always enough prep to do, including waiting for the water to boil, that at no point was I waiting for the coffee to grind before I could move on. However, if speed really is a priority for you, there are much faster electric grinders on the market.

So far, the Encore is doing well, but what about noise? This is where the Aergrind (and any hand grinder) excels. Again, I have no measurements to back up my observations, but the Encore is far, far louder than hand grinding. You can get quieter electric grinders, but in the same way that an electric grinder is always going to be quicker, it’s going to be considerably noisier too.

Another consideration is grind quality/consistency which, once again, is entirely subjective. I don’t think there’s much between them, but by visual inspection, the Aergrind seems to produce a slightly more uniform grind, while the Encore produces more large, chaff-like particles (although when I tried this trick from James Hoffman to reduce static/chaff, it definitely helped).

Finally, the Encore suffers from retention, where a small amount of ground coffee remains in the grinder. If this isn’t cleared out before the next grind, you’ll end up with some stale coffee in with your fresh grinds. In contrast, I’ve never had any retention problems with any of my hand grinders.

In conclusion, there’s really not a lot between the two, with each having its pros and cons. While I didn’t to any taste tests (that is, at no point did I make coffee side-by-side with the two grinders and try to work out if one tasted better than the other), Amanda and I had no problems with the coffee made using the Encore, so whatever misgivings I might have about grind quality/consistency, I think that they are minor.

For me, the question comes down to two points. First, given the choice between the Aergrind and the Encore (when available), which would I use? Well, the answer is clear: I used the Encore every time. I have used the Aergrind to make coffee for two before now, and having to refill the grinder is a pain.

The other question is given that I already have my Feldgrind, am I going to buy an Encore (or another electric grinder). Here the answer is equally clear. No, I’m not. I actually enjoy hand grinding and while grinding just for myself, I’m really happy with my hand grinders. Even when Amanda visited, and I was regularly making coffee for two, I was quite happy using my Feldgrind. That said, if an electric grinder had been on hand, I’d have used it, but I didn’t (and wouldn’t) so out and buy one.

Where that helps anyone who is mulling over the question of whether to get an electric or manual burr grinder, I don’t know, so I’ll leave you with this beginners guide to grinders from James Hoffmann which might be of more use!

3 thoughts on “Making Coffee at Home: Manual vs Electric Grinders”