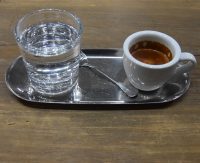 UNDEF/NE is inside an art gallery (Brownie) in a complex full of coffee shops, art galleries and coffee shops inside art galleries (Shanghai Art District M50). It was one of many recommendations I received from Joyce of Beijing’s The Corner when I visited in 2017.  It had the additional merit of being close to my hotel, itself chosen for its proximity to Shanghai Railway Station, the terminus of the sleeper service from Beijing. This was one of the hotels I stayed in on my return to Shanghai in 2019, so naturally I made several visits to UNDEF/NE over those two trips.

UNDEF/NE occupies part of the ground floor of what was an old factory building. It’s a series of multiple, interconnected spaces, including two mezzanine levels, which is part café, part gallery, the distinction between the two sometimes blurred. There’s a standard espresso-based menu, including flat whites, with each drink available hot or over ice, all made using a house-blend. There’s also a range of flavoured lattes, plus a small selection of tea. Alternatively, several single-origins are available as pour-overs through the V60. If you’re hungry, UNDEF/NE has a selection of panini and filled bagels, plus a range of cakes.

Finding UNDEF/NE in M50’s warren of buildings can be a challenge. There are many other cafés and galleries to choose from, and, while maps of the complex are everywhere, they’re in Chinese… On the plus side, once you get there, it’s obvious that you’ve reached UNDEF/NE. The trick is to walk through the main entrance from Moganshan Road, turning left at the end. UNDEF/NE is in a courtyard down a narrow passageway (see the gallery for directions).

A massive warehouse door, now with automatic sliding glass doors, leads into the main space, UNDEF/NE’s counter to your right, mezzanine level above. These two areas provide the majority of the seating, while there’s also a small seating area off to the left, which doubles as gallery space. At the back, more gallery space extends off to the left, where you’ll find a second mezzanine level, UNDEF/NE and Brownie making the most of the extremely high ceilings.

As you can see from (my) gallery, the layout’s changed since I first visited, the seating being more concentrated in specific areas, with sofas replaced by more utilitarian tables. Two half-height walls have also been erected at the back to better define the various spaces.

Alternatively, head upstairs using the staircase at the back, where you’ll find a large, mezzanine area over the counter. A large, wooden communal table in the centre seats six, while one of the wooden beams at the front of the mezzanine has been turned into a two-person bar overlooking the main space. On the opposite side, against the far wall, there’s a row of box seats with three more low cocktail tables, each with an additional chair.

It’s a beautiful, large, uncluttered setting, with plenty of space to enjoy your coffee in. The door/windows at front provide plenty of natural light, while the mezzanine has its own windows, all of which is supplemented by multiple lights. This is helped by the décor which is predominantly white/concrete, although the mezzanine is, by contrast, predominantly natural wood.

UNDEF/NE had been open for three years when I first visited in December 2017. I think it originally used Little Bean, but now I believe it uses a roaster called Shenyang Black & White (not speaking Chinese has its drawbacks!). On my first visit I had a flat white, the espresso blend going well with the milk, its strong, dark flavour cutting through the milk, but without being discordant. I paired this with an awesome brownie, moist, with a rich, chocolate flavour and a hint of something else I couldn’t quite put my finger on.

I returned twice this week, the first time for lunch, having an avocado, tomato and arugula bagel, effectively a toasted bagel with a very over-stuffed filling, which was very tasty.

Turning to coffee, I went for a pour-over with my lunch. Given a choice of two naturally-processed coffees, an Ethiopian Banko Gotiti and one from Yunnan, the coffee-growing region of China, I naturally had to try the latter. I confess to a little nervousness, since the beans looked a shade or two darker than I would like, but the ground coffee smelled amazing, having the fruitiness I associate with a good natural.

Served in a handless carafe with a glass on the side, plus a glass of (surprisingly, for China) cold water, it tasted even better. Looking like a red-wine in the carafe, tea-like in the glass, it was a delicate, subtle coffee, lacking the over-powering fruity notes that you can get with some naturals. Instead, it was a really well-balanced, well-rounded coffee, easily the best Yunnan coffee I’ve had in China.

Finally, I had an espresso on today’s visit, beautifully presented on a tray with a glass of warm water. It was quite delicious, a rich, complex blend, slightly darker than I’m used to, with a pleasing touch of acidity.

For an alternative view of UNDEF/NE, check out Sugared & Spiced, who visited not long after it opened in November 2015.