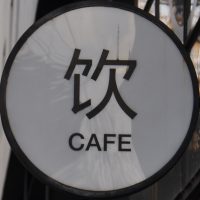 Finding out about new coffee shops, particularly when bereft of my usual tools of twitter and Google Maps, can be tricky. Under these circumstances, I tend to fall back on Method #1: word of mouth, which is how I found out about today’s Coffee Spot, The Corner. Having tracked down Soloist Coffee Co., the barista there put me onto Metal Hands, while the barista in Metal Hands told me about The Corner. So it goes in Beijing, and China in general.

Pleasing located on a corner, The Corner is an interesting spot, all concrete floors and industrial, metal interiors, spread out over three floors, connected by a staircase at the back. It’s also the first coffee shop I know of that’s located within a car repair workshop!

The offering is based around a simple, espresso-based menu, although there are no flat whites or piccolos, rather it is lattes and cappuccinos. This is backed up with a large selection of single-origin coffees which are available on pour-over, which seems to conform to the standard in Beijing, where a (often darker-roasted) blend is offered on espresso, with single-origins on pour-over. There’s also a limited selection of very tempting cakes if you’re hungry.

Finding out about Chinese speciality coffee shops is one thing, but tracking them down is another matter entirely, particularly since some of them are very adept at hiding. Located on Hepingli Street, just east of Ditan Park, The Corner takes this to new levels: had I walked up and down the street 100 times, I doubt I’d have found it. Fortunately, the barista at Metal Hands showed me a picture of the building it’s in, without which I’d have been completely lost.

The Corner occupies a large, long white building on the south side of the road with “B+“ painted on the top corner (there’s a picture in the gallery). At street level, a small sign saying “Café” is the only clue you have, but that’s easily missed since the building’s set well back. There’s also a sign saying “Entrance” but ignore that since it’s the entrance to workshop’s offices. They must, however, be used to people making the mistake because when I wandered in and said “Café?” in a suitably puzzled tone, they just waved me through the back where a corridor leads to The Corner.

Rather than my circuitous route, go down the (very narrow) gap at the side of the building, descending two steps on the way, where you’ll find a metal door next to a window with the words “The Corner” reassuringly painted on it. The door’s at the front of The Corner, on the right-hand side, opening immediately next to the counter. This runs along the front wall, facing into The Corner, so to get to the till, you need to go around to your left. A La Marzocco Linea espresso machine comes next, then there’s an area for pour-overs, where there are three clear, plastic stools for you to sit on and watch proceedings.

The counter, which looks as if it’s single concrete casting, continues along the left-hand wall where it morphs into bookshelves. The seating, meanwhile, is at the back on the right, leaving the left-hand side free to act as a long corridor connecting the counter with the staircase at the back, where you can also reach the offices and workshop.

The seating starts with a line of five two-person tables behind which is a long, six person sofa unit, with a corner seat at either end, three round, brass-topped tables in front of it. This faces the stairs, underneath which you’ll find one more seat, a two-person concrete shelf with padded cushions in the right-hand corner, with a solitary, small, round table.

The stairs run across the back wall from left to right, doubling back on themselves to give access to a metal walk-way which leads to a mezzanine level over the front half the store. There’s a long, communal table on the far side, over the counter, while on the right (your left) a group of four two-person tables are arranged in a square. The stairs continue to a second floor, where there’s a further room (closed during my visit) with even more tables for when it’s very busy.

The lighting downstairs can best be described as subdued, with three tall, narrow windows, plus the square window by the door providing the majority of the light. Other than that, you are relying on spotlights in the low, black ceiling of the mezzanine level. There is also borrowed light from the area at the back by the stairs.

I had a double espresso, which was commendably short and served in a round, bowl-like cup. The Corner uses a medium-dark blend, but with a nice acidity to it that really lifted it above the ordinary. I paired this with a slice of cheesecake, which, for whatever reason, has become my go-to cake in China. Without exception, they have been excellent and this lived up to expectations. Sometimes cheesecakes can be a bit light/ephemeral, but not this one. Thick and creamy, it had a real density to it.

While I was there, I met with Joyce, The Corner’s marketing manager. In the coffee-shop equivalent of paying it forward, she returned the favour done by Soloist/Metal Hands by giving me a long list of coffee shops to visit on my return to Shanghai, including Lanna Coffee and UNDEF/NE.

5 thoughts on “The Corner”