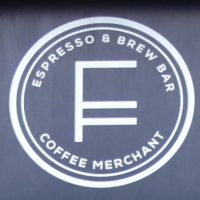 When I first visited, at the end of April 2014, Edinburgh’s Fortitude was the new kid on the block, having been open for all of four weeks. When I returned, at the end of last year, it had been going a bit long than that, but at first glance, not much had changed, particularly not when viewed from the street. Even when you go inside, the layout and décor is much the same, a small, high-ceilinged space, single window at the front, counter at the back, with the espresso machine tucked away around the corner.

However, look more closely and you’ll start to see the differences. The shelves on the right-hand wall, once lined with retail bags from the likes of London’s Workshop and Glasgow’s Dear Green Coffee, the bags now say “Fortitude”. That’s right, Fortitude started roasting. In 2017… That’s what I get for not visiting Edinburgh for over three years…

In terms of layout, little’s changed, although the counter is much bigger. Before it was a simple bar across the gap in the back wall. Now it extends forward in an L-shape along the left-hand wall, the extra space being put to use to house Fortitude’s expanded food offering which is displayed along the front. Breakfast and lunch menus, including toast, sandwiches and soup, now go with the existing selection of cakes. Meanwhile, the side of the counter holds the pour-over set-up, where you’ll find a couple of Kalita Wave filters, each with its own pair of scales.

The seating, which occupies the rest of the space, is pretty much unchanged. The door is on the left, with a very tall window on the right, in front of which is a round four-person table with chairs. Two small tables project from the right-hand wall, each with three small stools that are far more comfortable than they look. Completing the seating is a bar on the left-hand wall with four tall plastic stools.

The real change is with the coffee. When Fortitude started, it used Workshop with a regularly-rotating cast of guest roasters on espresso and pour-over, plus an even wider range on retail. Back then, you’d find owners Matt and Helen behind the counter, but in 2017, they took the decision to start roasting. These days, they spilt their time between the roastery, where they roast three times a week, and the coffee shop. And juggling looking after their young family. I managed to arrive on one of the roast days, so missed them, being expertly looked after by Cristabel and Niall instead.

All the coffee, including the retail coffee, is roasted in-house, Fortitude only offering single-origins. There are two on espresso and whereas before there was a single pour-over through the Kalita Wave, now you have a choice of four!

I’d already tried Fortitude’s coffee at the 2017 Glasgow Coffee Festival, as well as having a superb pour-over at The Kaf in Glasgow, so I opted for something espresso-based. Of my two options, a washed Colombian and a natural Brazilian, Cristabel explained that the Colombian went better in milk, so I had that as a flat white, it’s fruity nature (surprising from a washed coffee) coming strongly through the milk.

By then I was torn. I wanted to try the Colombian as an espresso, but the Brazilian looked interesting and was also available as a pour-over. Sadly, I only had room for one more, so Cristabel offered me the Braziian on the house as espresso, which was a lovely, fruity coffee, totally unlike the typical Brazilian flavour-profile. Sadly, Fortitude was out of retail bags, otherwise I’d have bought one to take home!

There’s a full write-up of Fortitude, including a complete gallery, in its main entry. You can also see what I made of it in my original write-up, from April 2014.

Liked this? Then take a look at the rest of Edinburgh’s speciality coffee scene with the Coffee Spot Guide to Edinburgh.