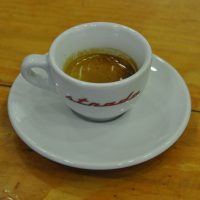 BLUEKING Coffee was a chance discovery while hunting down Manner Coffee on the same road on my first visit to Shanghai in 2016. It’s part of a cluster of coffee shops, including Lanna Coffee to the southwest, Sumerian Coffee to the north and, on the same east-west stretch, both branches of Manner Coffee. It also has the distinction, along with Sumerian, of being the only Shanghai coffee shop that I’ve visited on all three of my Shanghai trips.

When I first discovered BLUEKING, it had only been open for six months and, despite its small size, was roasting all its own coffee in the front of the shop. By my return a year later, it had a second shop (just past Manner Coffee on Fengxian Road) and a dedicated roastery, the original branch now forming a cute coffee bar, serving espresso and pour-over, plus a small selection of cakes.

BLUEKING Coffee is on Nanyang Road in the Jing’An district of Shanghai, between the Jing’An Temple and Nanjing West metro stops. If you’re looking for other landmarks, Nanyang Road is parallel to and between the major east-west arteries of Nanjing Road (to the south) and Beijing Road (north). Once you’ve found Nanyang Road, BLUEKING is very easy to spot, on the southern side, close to the western end of the street.

There’s very little to BLUEKING, just a small shop, with an entirely glass front, one third of which is the door on the left. There’s a bench outside in front of the window, while inside, the counter runs the entire width of the store, occupying the back half. You can sit here on one of three bar stools to the right of the till where you order (and peruse the cakes), or there’s a window-bar with another three seats at the front. On my first visit, when BLUEKING was still roasting there, the roaster was off to the right and, while the window-bar had stools, there wasn’t really enough space to sit there!

It’s a very intimate space and can get quite noisy when it’s full (which was the case on my second and third visits). This does mean you get up close and personal with the coffee though, sharing the counter with the pour-over set up and having the perfect view of the two-group La Marzocco Strada espresso machine which is on the back wall.

On my first visit, I tried a sample of a Kenya AA through the Chemex, which the staff had just made, a very fine fruity coffee. Then we got talking (mostly through the translator software on my phone) and they roasted some Antigua Guatemalan beans, which they made there and then as a V60. I’ve never had coffee so fresh before, but it was very well-balanced. I suspect it would have been even better once it had rested for a day or two.

On my return in 2017, I tried a single espresso, but I didn’t make any notes (or if I did, I lost them), so on my return last week, I had another, a double this time. I wanted to try it on its own, having had it in a flat white earlier that day at the second BLUEKING. The house espresso is an Ethiopian, Guatemalan, Colombian and Brazilian blend which looked quite dark in the hopper and so it was in the cup. Not an unpleasant coffee, it was strong and rich without being overly bitter. I can see why it went so well in my flat white, although maybe next time I’ll venture back on the pour-overs!