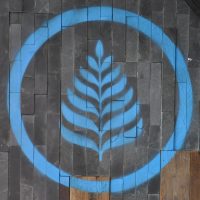 When I first came to Shanghai in 2016, the first speciality coffee shop I visited was Sumerian Coffee where I enjoyed my first taste of Chinese-grown coffee, from Yunnan Province in the south of the country. What I didn’t realise at the time was that, not far from Sumerian Coffee, stands Lanna Coffee, which embodies the whole farm-to-cup principle that I first saw in Vietnam, where Oriberry Coffee is probably the best proponent. You see, Lanna Coffee doesn’t just serve Yunnan coffee, it grows, processes and roasts it in Yunnan. Coffee doesn’t get much more direct trade than this.

Lanna Coffee occupies a small spot at the end of a row of equally small coffee shops (and one barbers/coffee shop). The majority of the seating is outside, in a sheltered, semi-enclosed area, with the coffee shop proper at the back, behind glass double doors. In all, you might seat 14 people if everyone shuffles up.

Despite this small size, Lanna Coffee serves a decent, western-style breakfast/brunch menu, plus a small selection of cakes, to go with its coffee. There’s the Red Lantern blend on espresso and a range of single-origin/single-estate Yunnan coffees to buy or to enjoy as a pour-over.

The road to Lanna Coffee on Shanghai’s Yuyuan Road started in Beijing where Soloist Coffee Co. told me about Metal Hands, which in turn led me to The Corner, where I met the lovely Joyce. On learning I was returning to Shanghai, Joyce gave me a long list of coffee shops to visit. Top of that list, for me, at least, was Lanna Coffee.

Yuyuan Road is in a busy area between the Jing An Temple and Nanjing West Road stops on Metro Line #2, bounded by Nanjing West Road to the south and Beijing West Road to the north. It’s not short of great coffee, including Manner Coffee, BLUEKING Coffee and the now defunct Uncle No Name, while Sumerian Coffee, AUNN Café & Co. and Seesaw 433 (which has also closed) are not far away. The street itself is narrow and busy, its north side lined by a row of small coffee shops, with Lanna Coffee at the western end.

There’s a two-part wooden outside seating area, sheltering under a plastic awning and set slightly back from the street. On the left, a three-person bar faces the road, while on the right, a bench runs along the wall, with two high four-person tables. Between them, a wide gap leads to the coffee shop at the back, behind glass double doors.

Here you’ll find the counter, right at the back, with a wide, three-seat bar on the right. Although this means sitting with your back to the counter, it’s actually a very cosy, relaxed spot, with exposed brick and plaster walls, tiled floors and a white ceiling with a wooden lattice. The counter’s a simple, wooden affair with a single, solid top, so the baristas have to climb out under it through a well-concealed door. There’s a gloriously deep blue La Marzocco on the right, with its grinder, followed by the EK43 for pour-over, while the till, a small selection of cakes and retail bags of coffee are on the left, above the aforementioned door.

The menu’s on the back wall and, incredibly for somewhere so small, offers a decent, western-inspired breakfast/brunch menu, with various staples on bread/bagel (croissant/bagel for breakfast). There’s also a small selection of salads.

I started with a double espresso of the house-blend, Red Lantern. This won’t be to everyone’s tastes and Yunnan still has a long way to go as a coffee-growing region, but I liked it. Dark, but surprisingly not bitter, it had a full-bodied taste and a syrupy mouthfeel, reminiscent of the Yunnan coffee I had on my previous trip. I paired this with avocado and egg in a whole wheat bagel for lunch which was excellent.

At that point, I met Anna, Lanna’s marketing manager, who told me something of Lanna’s history. Opening in 2014, this is the original store, while there’s a second in the Huangpu District and a third in the pipeline. We also talked about the possibility of a visit to Yunnan Province itself on a future trip.

While chatting with Anna, I tried the Nu River, one of three single-origins available through the V60. Although labelled medium-light roast, the ground coffee had a dark smell (if you can describe a smell as “dark”). This carried over to the coffee itself, which is very different from the lighter roasts that I’ve become used to over five years of writing the Coffee Spot. However, it grew on me as it cooled, losing some of the darkness, allowing more of its fruity nature to come through. I was sufficiently impressed to buy bags of the Nu River and Kinari 45 single-origins, which I’ve brought back as gifts.